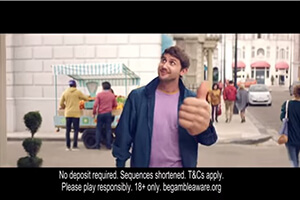 PlayOJO Casino has launched a massive advertising campaign focusing on responsible gambling in Sweden. It aims at raising awareness of the tools the online casino offers its customers to help them continue to play responsibly. The campaign is currently being broadcast across major TV, radio and digital channels in the UK.

Thumbs Up for Responsible Play

PlayOJO, one of the online casinos powered by SkillOnNet, launches the Swedish version of its feel-good Thumbs Up campaign this September. Focusing on responsible gambling, the advert will be broadcast across the biggest TV channels in Sweden including TV3, TV6 and Kanal 5. In addition, the campaign will also feature on national radio stations and online from this month.

The key message of the campaign is to play casino games responsibly. To stay in control of their play, players in Sweden can use the tools PlayOJO offers.

Peter Bennett, Head of Brand Marketing at PlayOJO, said that PlayOJO was the fair casino where players were put first, which they wanted to reflect on in their latest advertising campaign in Sweden.

“The ads really drive home the controls we have in place to ensure that players are properly protected and the tools we give them to continue to play responsibly,” said Bennett adding that they believed their Thumbs Up campaign would help further establish PlayOJO as a leading online casino destination in Sweden and the only truly fair place to play.

The adverts won’t be broadcast between the hours of 4 pm and 9 pm, though. This way, PlayOJO wants to mitigate the risk of underage players seeing the commercial. According to the press release, this is in line with the operator’s decision to stop advertising to players in Sweden between these hours as part of its stance on responsible gambling.

“As per our earlier decision to only advertise on TV in post-peak periods, our latest campaign will not be broadcast between 4 pm and 9 pm each day making PlayOJO the only online casino in Sweden to focus on responsible gambling in all its advertising and stop advertising on TV before 9 pm,” concluded Bennett.