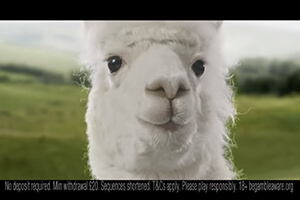 We have already reported that PlayOJO has taken the headline spot for the reality show with a strong fan base and according to their latest press release, they will sponsor hit crime programme Efterlyst (Wanted). Another show that PlayOJO will back is the hugely popular Vinn Adam’s Pengar (Win Adam’s Money) competition, which is a part of the Vakna med NRJ (Wake up with NRJ) radio show.

Efterlyst is broadcast live from the TV3’s Stockholm studio. The show hosted by Hasse Aro deals with unsolved crimes across the country with its viewers following the police as they work on solving them. On the other hand, the Vinn Adam’s Pengar competition invites listeners to answer questions for a chance to win presenter Adam’s money.

It’s All About Fair Play

PlayOJO, an online casino powered by the SkillOnNet platform, will further strengthen the sponsorship deals by launching its latest TV ad campaign in Sweden. Featuring a sad Alpaca, the ad tells the story of players who have been treated badly by other online casinos. Once the Alpaca learns about PlayOJO and its bonuses that come with no wagering requirements attached, he turns from being sad to cheery. This symbolises the change that PlayOJO has brought to the online gaming industry and players in Sweden, where it was launched in January this year.

“The combination of these sponsorship deals and the launch of our latest TV ad campaign will increase awareness of our positioning as the fair casino and further establish PlayOJO as one of the most popular online casino brands in Sweden,” said Peter Bennett, Head of Brand Marketing at PlayOJO.

He added that in less than a year PlayOJO had gone from new market entrant to household name thanks to their aggressive on and offline marketing strategy and the transparency they offered to their players.

Although it is still a relatively new brand, launched in the UK in February 2017, PlayOJO has already earned an excellent reputation among players due to its unique approach. Such a policy earned them several industry awards, including Rising Star at the EGR Operator Awards 2017.