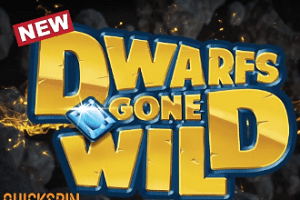 It seems that Quickspin have finally developed a perfect game that will satisfy the needs of all spinners worldwide. They have dug down deep into the depths of their imagination and produced a video slot that they hope to be the flagship game for 2018 – Dwarfs Gone Wild. Seven superhero Dwarfs join the lovely Snow White and dig for vast underground riches.

The 2018 release is a five-reel slot with 20 fixed paylines that will offer a range of exciting and rewarding additional features. Themed after the famous fairytale, the game will follow the seven Dwarfs and Snow White on their adventure deep underground.

The information about the upcoming slot is scarce, but we managed to dig out a few important facts about the Dwarfs Gone Wild video slot.  The reels of the Quickspin product are set in the mineshaft, where these superhero Dwarfs dig for treasures. Every single Dwarf has his own superpower, which will be presented during the Free Spins feature, triggered by Golden Minecraft Scatters.

For example, the Strongman Dwarf from Spain will leave rolling Wilds on the reels, while the Blacksmith Dwarf from Norway, who is a hard working hipster, will pour molted gold on the reels and turn it into a Wild reel. The Racer adds throwback Wilds, while the Bomber uses his explosive devices to add spreading Wilds. It remains a mystery how the Dwarf features will be triggered, but we do know that gamers can also expect multipliers, extra free spins, free Wilds and much more.

Expect a Mystery Feature During Base Game

If our sources are correct, the good people of Quickspin also introduced a Mystery feature that can be triggered during base game. As far as we can tell, it has something to do with the famous Beauty Mirror, which will probably be used as a Scatter that triggers the Mystery feature. We presume that you will need three Mirror Scatters to start the feature, and once you trigger it, you will get 300 additional symbols and two free spins.

The exciting Dwarfs Gone Wild video slot is to be released on 12th June, and until then, you can check out Quickspin’s other titles, such as Pirate’s Charm, Joker Strike, or Volcano Riches, or play all Quickspin games at Mr Green Casino.