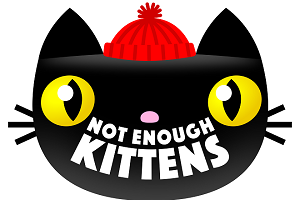 Are you fond of cute felines and can’t get enough of them? Then you will definitely like the latest release coming from Thunderkick’s creative kitchen, called Not Enough Kittens.

The renowned professor from P.U.S.S. University, Catarina Kettlingur has found a perfect solution for all cat lovers in her laboratory, and little pussycats will take over the screen and your hearts, because that’s how adorable they will be!

The Thunderkick product will be released on 6th December, and up until now the good people of Thunderkick have been keeping all the relevant information about their latest title pretty close to the chest.

The only thing we can be sure of until now is that the game will definitely be cute and fluffy, since there will be lots of adorable cats! We expect a standard 5×3 layout and a usual control panel that can be found in every other Thunderkick title.

As for the special features that will be incorporated, they decided to leave us in the dark for the time being, but we did manage to discover that they will include double symbols for double the kittens and double the fun, as well as the usual Free Spins feature and retriggers.

While you are waiting for the Not Enough Kittens video slot to be released, you can kill the time with other Thunderkick products, such as Pink Elephants, where you will go to Africa and join a cute Meerkat tribe that prays to its elephant deities in order to win huge payouts and trigger lots of free spins. Little hint – bring plenty of peanuts with you, because this is elephants’ favourite treat and will help you trigger the features more easily.

If you are more into werewolves and rockabilly music, then you should definitely check out Full Moon Romance, a video slot that will offer you a fun trip back to 1950’s, where gamers enjoy the adventures of Jack and Rosie in Puppy Love, while triggering lots of freebies and winning big.

Thunderkick is a software development company from Stockholm, Sweden. They have recently celebrated their 5-year anniversary and in a short period of time their experienced team succeeded in creating a large network of clients. Some Thunderkick casinos even managed to win the Online Casino Operator of the Year award. Around thirty video slots currently on the offer can be found in more than 100 online casinos around the globe.