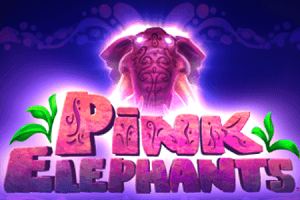 Prepare yourselves for a fantastic trip down to the deserts of Africa, where a cute little Meerkat tribe is praying to their deities – the Pink Elephants, thus the name of the game. Visually impressive, the  2017 release features six reels, four rows and offers 4096 ways to win. Join the Meerkat tribe in their prayers and offer sacrifice to Pink Elephants in order to trigger the Free Spins feature and get lucrative prizes. The deities act as normal elephants, so their favourite food is peanuts, which serve as Scatters. Collect at least three of them in order to trigger the feature and get up to 19 freebies. During the feature, pay attention to the Bonus Game Meter and gather the orbs carried by Elephants, so as to get extra freebies and turn all high-value symbols into Pink Elephants for bigger payouts.

This lovely tribe consists of four Meerkats. The leader is the Red Meerkat, which is the head of the tribe. There is also the Yellow Merkaat, and we suppose she is the wife of the tribal chief. Two young Meerkats are there as well, the Green and the Blue one. The Pink Elephant is the symbol that pays the most, which is obvious, given the fact that it is the most important icon in the slot. Playing cards symbols carved in stones represent the low-value icons. The Wild appears on all reels and substitutes for all regular symbols. The Peanut is the Scatter that triggers the Free Spins feature and can get you up to 19 freebies at once. 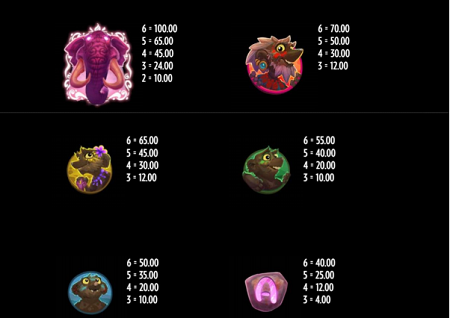 The rules of the game are pretty standard, so if you played any of Thunderkick products in the past, you will have no trouble at all understanding how everything functions in this hot desert. Pink Elephants is a six-reel slot that offers 4096 ways to win. The 2017 release pays left to right, beginning from the far left reel. Due to the fact that there are no classic paylines, it is much easier to land payouts. Gamers need to land at least three matching symbols on consecutive rows in order to win a payout. The only exception is the Pink Elephant, which will even pay for two of a kind. Note that symbols tend to land in stacks, so punters can expect sweet wins during the base game.

Once you set the desired bet, you are ready to spin the reels. The control panel is very simple to use, offering usual options, like Autoplay with lots of automatic spins, Bet option, Sounds and Paytables, where you can check out the rules of the game.

We mentioned earlier that Peanut Scatters trigger the Free Spins feature. Land three of them on the reels and get 7 free spins. Four Peanuts will reward you with 10 freebies, five come with 12 free spins, while all six Peanuts on the reels will earn you 19 free spins. That is not all, because you can win a lot more extra free spins during the feature. Land additional Scatters (at least two of them) and get 3-11 free spins in a single spin.

Now, you will notice that four Meerkats are placed next to the reels, surrounded by funny-looking circles. This is the Bonus Game Meter. While you spin the reels, Elephants will appear carrying orbs. Orbs are collected on the Bonus Game Meter and every time one of the Meerkats is completely surrounded by shiny orbs, it will turn into the Elephant symbol and one extra free spin is awarded. It is possible to turn all Meerkat symbols into Elephants, and huge payouts can be won.

There is more than one way to trigger the Free Spins feature. During base game, the Mystery Scatter Symbol feature can be triggered at random, and gamers can land from 1 to 5 Mystery Scatters, thus increasing their chances of triggering free spins. 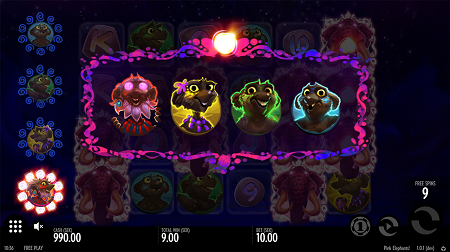 If the Elephant deities decide to hear your prayers, you can win up to amazing 8,200 times the be! That amount of coins can buy you lots of peanuts you can use to treat the Pink Elephants. Land six of them on the reels and get 10 times the bet. Massive wins can be expected during the Free Spins feature, especially if punters manage to get lots of extra freebies. Pink Elephant’s Theoretical Return to Player is 96.1%.

Even though the slot is yet to be released, our sources tell us that the good people of Thunderkick will not let the Pink Elephants video slot out of the workshop until they turn it into a superb game that will be available across all devices. So, mobile gamers will definitely have their chance to explore the African desert on their handheld gadgets, like tablets and smartphones. Of course, the quality of the game will be completely the same as in the desktop version.

– Too many playing cards symbols

– Hard to obtain the maximum payout

Even though the very title of the 2017 release could make us think that the game would be located in some fairy land with lots of cute pink elephants flying around, the truth is that the elephants in question are everything but cute. Either way, gamers will be stunned by superb graphics and the matching soundtrack. There is only one additional feature, in the form of free spins, but that’s more than enough for every spinner to land enormous wins, with lots of possible free spins and stacked high-value symbols. Players will definitely love Pink Elephants, and the latest Thunderkick title will be a huge hit this fall.