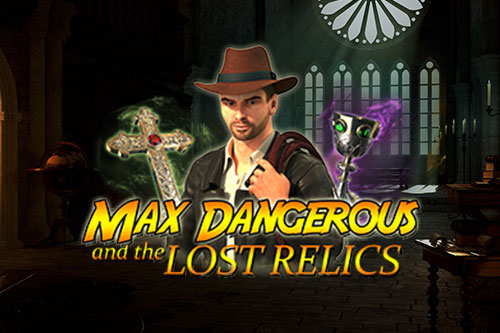 Red Rake Gaming has just released a brand-new video slot that promises to deliver lots of excitement this summer.

Titled Max Dangerous and the Lost Relics, the developer’s latest addition to its portfolio comes with a five-by-four layout and offers a total of fifty active lines to play on.

The main character of the new game is the daredevil archaeologist Max Dangerous, who’s about to embark on an epic adventure filled with numerous features and chances to claim fantastic prizes.

In addition to five reels, the Red Rake Gaming title has five meters: plane, whip, hat, skull, and chalice. Every time you form a winning combination with one of these symbols, you’ll fill the corresponding meter. Unfortunately, any Wilds found in the win won’t make any contribution.

Filling the whip meter awards a symbol and a multiplier, turning all instances of the whip icon into the chosen multiplier. Once all of the multipliers are combined, the final one will be used to boost your stake.

The plane will move one row at a time, substituting all symbols it encounters along the way with new ones. It won’t be able to replace any Wilds, though.

Fill the skull meter to receive three sticky Wilds, with each one having three lives. Form a winning combination, and your Wilds lose one life. The symbols will disappear once all the lives have been used up.

If you succeed in filling the hat meter, you’ll see the first three symbols in the second reel replaced by Wilds. In addition to that, three more Wilds will be added in the upper positions of the grid, falling down on the reels in cascades after a win is formed.

The chalice meter unlocks the Free Spins round, awarding twelve spins. It has the potential to deliver handsome payouts, mainly due to the multipliers it brings into play.

Expect fast-paced gameplay with easily triggered features and an immersive soundtrack that is sure to capture the player’s attention from the moment the reels start spinning.