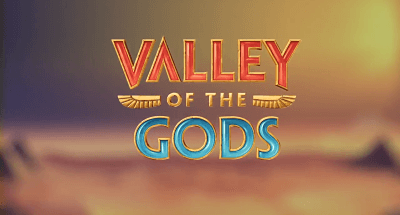 Yggdrasil Gaming is preparing for an epic adventure that starts on August 24, and that promises plenty of excitement and fun, and even more when lucrative winnings are in question.

Valley of the Gods is a five-reel video slot set in the ancient Egyptian temple. This thrilling release offers re-spins after every winning spin, while the winning combination will help you expand the game area and discover additional mysteries.

Magic awaits in the ancient tombs, along with wealthy treasures that come in the form of multipliers and extra lives.

Valley of the Gods Slot Review

This title will definitely be rich in features, which will undoubtedly offer lots of opportunities to grab hefty winnings.

Each spin that results in a win will bring a re-spin, which will continue as long as there are winning combinations.

Landing winning combination can also help you destroy 12 blockers that cover 12 different reel positions. Each of those blockers has a scarab on it, which gets released upon its activation and then destroys a blocker. Destroying the blockers awards Win multipliers and extra lives, while the latter is achieved by collecting scarabs which remain after a blocker gets removed from the reels. 5 scarabs give 1 extra life.

When it comes to multipliers, they are awarded only after all blockers are destroyed. The starting win multiplier is x2 and can be increased by collecting blue scarabs. 5 scarabs will increase the multiplier by 1.

Valley of the Gods on Mobile

Yggdrasil has good news for all those who like their slots on the go, since Valley of the Gods will be available across multiple platforms. This means the players will be able to enjoy their game whenever and wherever they want, on a wide variety of devices.

This medium variance title will offer well-balanced payouts, while the expected return to player is 96.2%.

Remember, the adventure starts on August 24. In-depth review of the game will soon be available in our Slot Reviews section, whereas SpinIt and Rizk are some of our recommended Yggdrasil casinos that will feature Valley of the Gods slot.