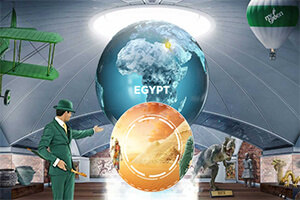 Mr Green is celebrating a 10 year anniversary in 2018 and you can join the celebration to win some valuable prizes.

To celebrate the 10 year anniversary, Mr Green has come up with a promotion which will engage players and reward them every week for an entire year. They will be taken on an adventure around the world and, in January, the first destination on the map is Egypt.

Players who join the adventure in January can win a luxury car and their share of the €10,000 prize pool. To take part in the Main Draw which will be held on 1 February, participants have to collect prize draw entries in each destination. Along the way, they can pick up daily bonuses.

Those who prefer sports betting can place their bets worth €25, €50 or €100 on 5 January via Instant Tennis on any of the Men’s Quarter Finals, Women’s Semi Finals or Men’s and Women’s Doubles at the Brisbane International and collect 2, 5 or 10 entries respectively for the Main Draw and the €2,500 Blaze of Ra Prize Draw on the 8 January.

Remember that you can collect an unlimited number of tickets to increase your winning chances in the Main Draw on February 1, 2018. Check out the Mr Green website to learn where and when you need to play to earn your entries. Keep in mind that games and rules will change frequently and that the top 20 players with the largest number of tickets will be displayed on the daily leaderboard at the bottom of the campaign page.

The top prize you can win at the end of your journey in January is the brand new BMW218i sports convertible. It is one of the most desirable models on the market at the moment and it is great fun to drive. Collect as many tickets as possible and you can be the lucky winner of the luxury convertible in the Main Draw on February 1.

The luckiest 500 players will win their share of €10,000 in cash prizes. The prize draw will take place on 1 February and the lucky winners will get their prizes within 72 hours. All cash prizes that will be awarded are real cash with no wagering requirements attached.

Visit Mr Green to join the celebration and attempt to win one of the prizes in store!