We are back with our slots with the highest RTP series of articles, and this time, we bring you the top Push Gaming titles. The great news is that some of their most popular titles are included in this list, so let’s learn more about the high RTP Push Gaming slots and bonus features they have on offer.

Themed on bees, Wild Swarm is a 5-reel, 20-payline slot that takes you to a dark forest. It serves as a backdrop for the reels populated by symbols coming in bright colours. When it comes to graphics and sounds, they are a typical Push Gaming affair, meaning that they are done impeccably. The reels are home to a mix of wooden playing card royals and theme-related symbols such as honey pots, flowers and queen bees as well as a dollar sign.

You will easily recognise Wild that will complete your winning combinations. The hive symbol acts as Scatter that triggers the Free Games feature. Within the bonus, all Wilds hitting the reels remain in their positions. There is also the Pick feature activated by the chest symbol. Once in, you have to pick one of the five honeycombs to reveal cash prizes or free spins. Finally, the game offers the Swarm Mode feature available in the base game when a bee lands on the reels. It will fly into the hive located on the right-hand side of the reels. When the meter reaches level 5, and another bee symbol hits the reels, the beehive will explode to award 10 free spins where you will benefit from extra sticky Wild.

Another high RTP slot from Push Gaming introduces an old sorcerer to you. Wizard Shop uses an unorthodox 5×6 grid and offers 50 paylines. The reels are set within the wizard’s lab where he will perform some magic to help you win some hefty prizes. Again, we have an impressive design with a selection of wizard’s items occupying the reels. The wizard himself is the top paying icons along with Wild, which performs its standard duties.

If you manage to cover a reel entirely with wizard symbols, you will activate the Wizard Wilds feature and turn the triggering symbols into substitutes. The game also features the Gold and Silver Coin Token that are added to the reels randomly. You are free to collect them and use them at the Wizard Shop to buy extras. Scroll Scatters trigger the Wizard Shop feature that awards 10 free spins plus 120 coins. You can use the coins you have received and collected to purchase up to 250 extra Wilds, up to 10x multipliers and boosted Scatter prizes paid by treasure chest symbols.

From sorcery we move on to decipher secret codes in The Shadow Order slot using a 5×5 layout and Cluster Pays mechanics. The game takes you to a luxurious mansion where you need to break the codes to get paid. The game features a combination of theme-related icons including books, cryptex, chess pieces and playing card symbols rendered to look like letter seals.

The golden star with the Eye of Providence stands for Wild that completes your wins. Whenever you hit a win, the successful symbols are removed, and new ones fall into their place. On top of the reels, you will notice a blue, green and purple orb. Fill them with cascades, and they will drop down to turn into Wilds. If they fall into one of the three Hot Zones, they will activate one of the bonus features. They include Orb of Destruction, Orb of Creation and Orb of Preservation. The first one removes low-value icons, the second feature adds up to 6 Wilds to the reels while the last one keeps the highest paying symbols while new cascades take place for higher payouts.

The fun does not end here, as The Shadow Order also offers extras based on four animated characters. To trigger these features, you need to ring symbols and fill the meter. Molly the Messenger will charge the top row and release the orb 1, Billy the Gambler will turn low-value symbols into more lucrative ones, Archie the Spy will add Wild to each reel while Amarillo the Magister will award a cascade with high-value symbols only.

There is also a free spins feature which gets triggered by 3 orbs reaching the bottom right corner of the reels. It grants 5 free spins with all spheres turning into sticky Wilds. They can also award expanding multipliers going up to 30x. As you can see, there is a lot of going on in this Push Gaming title, which makes giving it a go worthwhile. 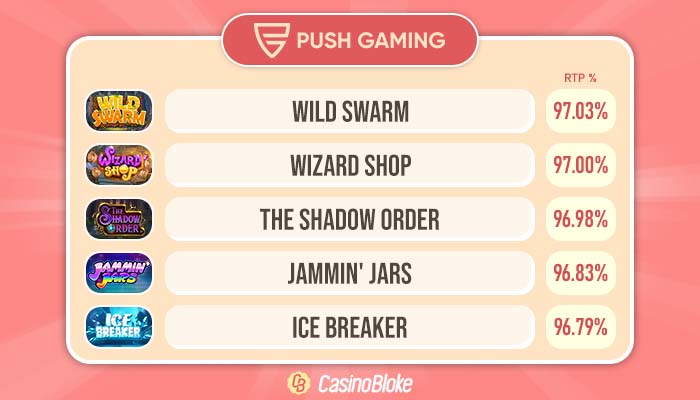 This is probably the most popular game by the developer due to its rewarding yet straightforward features and prizes going up to 20,000x the bet. Using an 8×8 grid, the slot pays as long as you create clusters of 5 or more symbols of a kind. Being a new take of a classic fruit machine, Jammin’ Jars is all about Jam Jar Wilds that comes with multipliers increasing on each win or cascade. Did we mention a cascade? Yes, they will provide you with additional chances of winning.

As for bonus features, you can benefit from the Rainbow feature that is activated on any losing spin. A rainbow will appear across the reels to award a massive fruit symbol, thus boosting your winning chances. Then, we have Jam Jar Wilds that move to random positions whenever they contribute to a win. If this results in a cascade, Wild is held in its place. Each following cascade increases the multiplier by 1. When you land 3 or Wilds on the reels, you will enter 6 free spins where the multiplier increases on each cascade. What’s more, multipliers granted in the base game are carried over to free spins.

The last entry in this list is Ice Breaker, a 5-reel slot offering 243 ways to win. This is one of Push Gaming’s older titles, and it is evident once you load the game. Its graphics are simply less polished than those we have seen in the previously mentioned games. Yet, it doesn’t mean that you won’t have fun unless you freeze. We’re dealing here with blocks of ice along with fish captured within ice cubes.

The clam with a pearl assumes the role of Wild that will help you create more winning combos. It can appear on all the reels except for the first one. Land 2 or more fish symbols on a single reel and you will trigger a collapse, with two triggering icons dropping down to award another fish symbol. This also increases a multiplier, which will be equal to the number of fish symbols appearing on that reel.

Keep an eye on Hammer Scatter as 3 of these hitting the reels 1, 3 and 5 unlock 6 free spins. Within the feature, only fish symbols, Wilds and Scatter land on the reels, which boosts your chances of winning big. Practically, a multiplier will apply to each free turn.

Click here to visit BitStarz and give high RTP slots from Push Gaming a try!