Let’s be honest; everyone plays online slot games to win. Some players prefer games that boast high-quality design, while others pay more attention to the games’ features or betting options. In the end, it’s all about finding a slot that will deliver handsome prizes. That’s why it’s crucial to choose a title with a high payout percentage.

Headquartered in Prague, the Czech Republic, Endorphina has been developing online casino software since 2010. The company has an extensive portfolio of slot games, offering players plenty of themes to choose from and lots of features to enjoy. The renowned brand is committed to creating outstanding releases and is constantly looking to improve the overall performance of its products. When compared to some other game developers, the RTPs of Endorphina’s games are not that high. However, that doesn’t mean they like the excitement or chances to scoop excellent payouts.

Embark on a quest to uncover the immense treasures of Asia, hidden in the most secret places. Launched in time for the Chinese New Year, this thrilling release provides players with the chance to claim the gold of the Orient.

Golden Ox takes slot lovers to an immersive Mandarin world set in luxurious surroundings. Every detail has its meaning, and it’s there to bring players good luck, from golden coins to lotus flowers and red envelopes. The playing experience may be challenging, but the rewards are worth the risk.

The game takes place on a grid consisting of five reels and four rows, with a total of fifty active lines to play on. The golden ox serves as the Wild, replacing all other symbols except the Scatter. A Chinese golden coin is the game’s Scatter, with three of a kind activating the Free Spins bonus round and awarding ten spins. Not enough? There’s always the Risk game to help you increase your winnings. Be ready to take the ox by the horns, and your bravery will be rewarded. Wagering starts at just $0.01, while the game’s broad wagering options make this title suitable for all types of players. 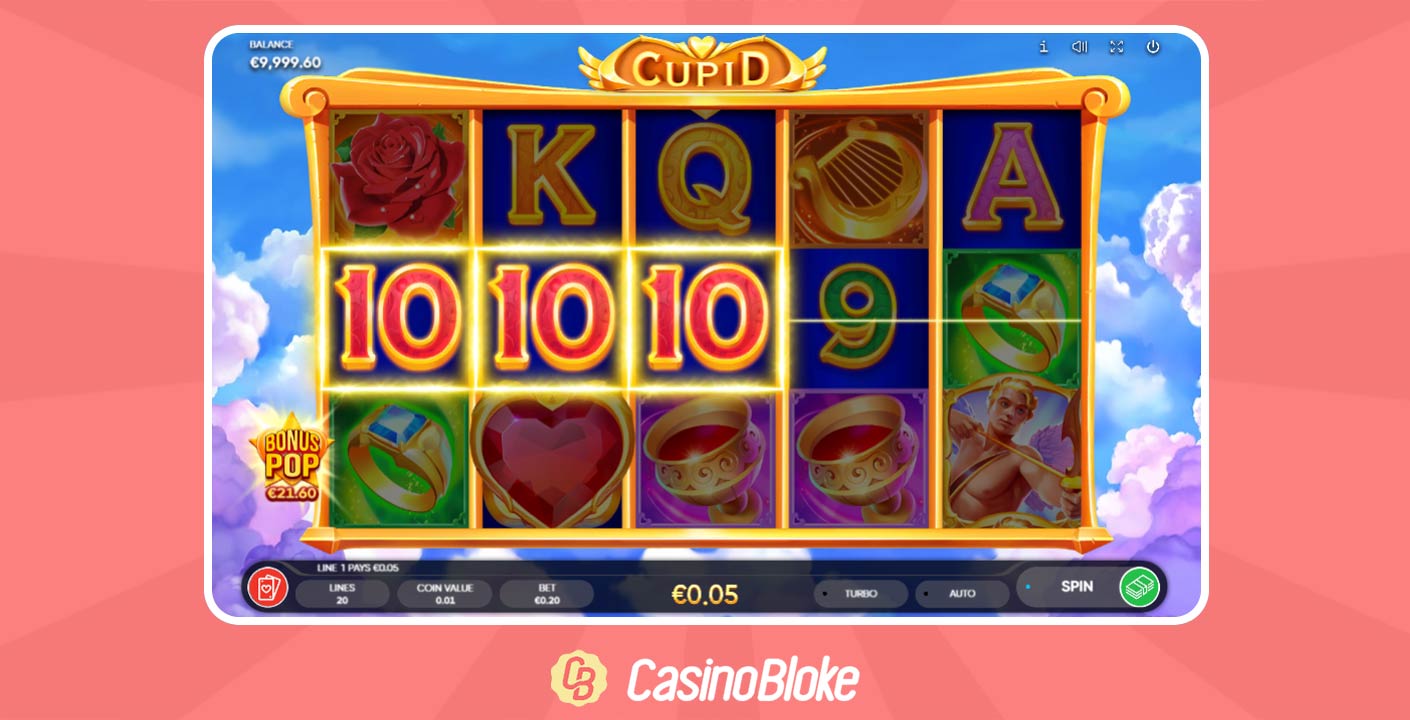 It’s time to fall in love, as Cupid is coming to the reels in this 2021 release from the Czech developer. He is just a regular guy, spending his days like everyone else. However, once a year, it’s his time to shine and go on his secret mission of love. That’s when the adventure starts.

Valentine’s Day is the time for Cupid to use his arrows and bring love to all those in need of it. But no one must know of his task, so his mission must stay secret. The agent of love will not only bring couples together, but he’ll also give them the chance to claim substantial romantic wins. Every year, he returns to bring more chances of finding happiness.

Cupid is played on a standard five-reel, three-row grid with twenty paylines.

The slot’s main protagonist serves as the Wild, while the heart symbol acts as the Scatter. Land three or more Scatters to unlock the Free Spins feature, with players receiving twenty spins. While the bonus round is active, joining left and right heart halves into one will award the symbols’ value multiplied by the total bet. Endorphina’s signature Risk game is also on offer.

Akbar’s empire was known for its immense riches, kept hidden from unwelcomed invaders by the mighty ruler. Endorphina is now giving its players the chance to claim a portion of it in this exciting story about Akbar and his raja Birbal. Get ready for an adventure you won’t forget.

Join forces with two legendary daredevils from India in this graphically stunning release that promises not only to entertain even the most demanding players but comes with numerous opportunities to win. 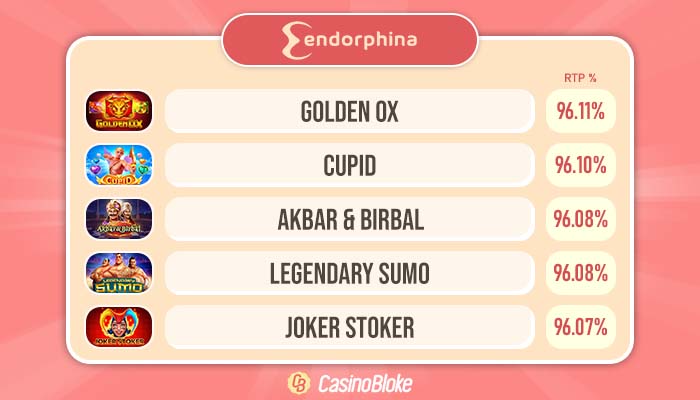 Akbar & Birbal takes place in familiar surroundings consisting of five reels and three rows, with players having twenty paylines to benefit from. All matching symbols, save the Scatter, need to land on enabled paylines, while winning combinations are formed on adjacent reels, starting from reel 1. Birbal is the Scatter, and whenever you get three or more simultaneously, you’ll trigger the Free Spins round. That’s when the fun begins, as there’s no limit to the number of spins you can win. Add golden Akbar coins to the treasury to further add to the excitement. If you’re still hungry for a win, there’s the Gamble feature where you can double your winnings up to ten times in a row.

It’s time to unleash your fighting spirit in this Japanese-themed slot from Endorphina. Join the sumo wrestling elite to witness thrilling duels taking place in the Land of the Rising Sun. All ranks of rikishi boast courage and commitment, which means that everything is set for an epic season of tense battles.

Legendary Sumo is played on a standard five-by-three reel set, with a total of 21 paylines. Be on the lookout for Red Mask, which substitutes for all other icons bar the Scatter. The Scatter, represented by the Imperial Golden Cup, is crucial for triggering the Free Spins round. Just land three or more of them, and you’ll get ten symbols to start with. Get additional spins to retrigger the feature and claim more prizes.

Are you ready for a challenge, packed in a classic-style game with fruity symbols on the reels and lots of vibrant colours? If the answer is yes, then you should check out the Joker Stoker slot. Launched in mid-2021, this game is sure to appeal to players who enjoy gameplay with retro vibes.

Joker Stoker may have a classic theme, but it’s played on a modern reel set, consisting of five reels and four rows. Slot enthusiasts have forty paylines to help them claim wins. Matching symbols need to be positioned on enabled paylines while winning combinations are formed on adjacent reels starting from the leftmost one. There’s also a bonus-pop feature on offer, adding more excitement to the overall experience.

The joker symbol is the game’s Wild. When appearing on the reels, Wilds will set juicy fruits on fire. They also replace all other symbols except the Scatter. Landing three or more Scatters makes things even hotter, as the Free Spins feature is unlocked. Players can get ten, twenty or thirty spins, depending on the number of Scatters used to activate the round.