When speaking about games with a high return to player, one of the developers that comes to mind is undoubtedly Playtech. The gaming giant, which has been at the forefront of the industry since 1999, offers its players exciting and immersive titles that combine all the elements we’ve spoke of earlier.

Playtech’s slots we’re going to talk about in this article are the ones that come with the highest RTP. They have everything it takes to be successful: they look beautiful, they offer innovations and originality, and most importantly, their RTP is above average.

One thing before we kick-off. Playtech has several titles whose RTP reaches and even exceeds 99%. However, many of these games have long been discontinued, and you won’t find them at any online casino. That’s why we decided to include only those slots you can actually play.

Golden Tour is a relatively simple golf-themed release that comes with only five paylines. However, they pay both ways, which gives the game its distinctiveness. Before the reels start spinning, players will need to choose the coin value, which can be anywhere from $0.01 to $5. Paylines are adjustable, but it’s best to keep all of them active. Once you set up your wagering preference, hit the Spin button and the fun begins.

The reels are populated with golf-themed symbols like clubs, flags, and carts. There’s also a pair of golden golf balls, which replace other golf symbols. Using Wild combinations, you may end up winning both left to right and right to left. When it comes to claiming handsome payouts, it’s all about the game’s bonus round. Land three moles, fish, or ducks in consecution to trigger the feature.

Golden Tour may not impress you visually, but it has a lot to offer. In addition to a high RTP, there’s a progressive jackpot that has to be manually enabled. Be on the lookout for the Wild symbol, as it not only substitutes for other regulars, but it also awards a prize of 2,000 coins.

This five-reel slot comes with a nice-looking Egyptian theme and allows players to place bets on up to twenty paylines. Since they are adjustable, you’re free to choose how many of them will be active. Symbols on the reels match the game’s theme and include an oasis, a compass and a camel, along with the usual set of low-paying playing card icons.

The golden cobra symbol serves as the Wild, substituting for other regulars and helping players complete additional winning combinations. It also delivers a very lucrative payout worth 10,000 coins every time there are five of a kind across a payline.

A beautiful girl with black hair acts as the Scatter. Landing three or more Scatters will trigger the Free Spins round and award ten spins. You can maximise your winnings during this round. The graphics are simple and won’t impress anyone, but it’s the game’s RTP that draws lots of attention. With a nice maximum prize on offer, Desert Treasure is a game worth checking out.

Halloween Fortune boasts stunning visuals and, at the same time, features an exciting bonus round. This five-reel release comes with twenty paylines, beautiful witches as the game’s symbols and an exciting Witches’ Brew bonus feature. To trigger it, all you have to do is land two cauldron symbols on the leftmost and the rightmost reels simultaneously. 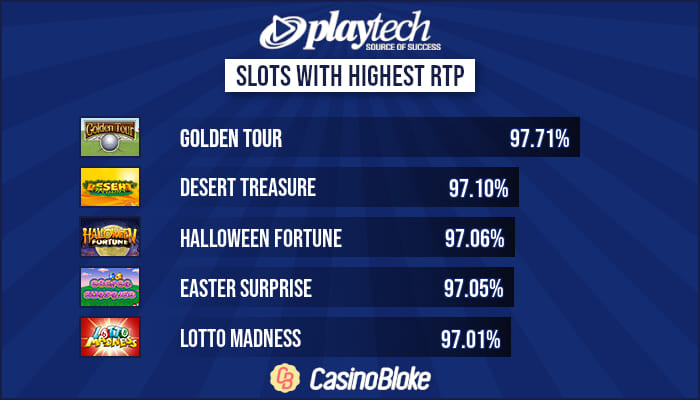 Before actually playing the bonus round, you’ll have to pick one of the witches to reveal the number of spins you’ll be given. With a bit of luck, you can claim twenty spins. Picking a potion bottle reveals a multiplier of up to 10x. The bonus round can be retriggered without any limits, leading to prizes reaching 100,000 coins. There’s also the Gamble feature, which allows players to double their winnings immediately after a winning spin. That certainly adds to the excitement.

This Easter-themed slot brings rabbits, baskets and Easter eggs to the reels. Easter Surprise is a brightly-coloured game played on a five-reel grid, offering players a total of twenty paylines. The reels are set against the backdrop of a lush forest, and on them, you’ll encounter a wide array of symbols. In addition to the usual set of playing cards, you’ll see yellow, blue and orange eggs, a rabbit, a basket full of eggs and an Easter Surprise.

Whenever you create a winning combination, you’ll get the chance to gamble your winnings. Click the Gamble button and pick between a red or black card. If you make the right guess, you’ll win. If not, you’ll lose your winnings.

Lotto Madness has two different versions, for both desktop and mobile. Although two variants are slightly different, they have been equally popular with players. The RTP is slightly higher on the desktop version, which may influence your overall experience.

The slot uses a well-known lotto theme, which developers have frequently used. This means that originality is not something this title boasts. Playtech has other, more creative games on offer, but this is the perfect choice for every high roller.

Lotto Madness is played on a five-reel three-row grid, with twenty adjustable paylines. Wagering options range from $0.20 to a maximum of $20 per spin. Featurewise, there are Wild and Scatter symbols and an excellent Free Spins round.

There’s one thing you should bear in mind. The RTP doesn’t mean that a player will win all the money wagered. It also doesn’t consider the game’s variance. It’s possible to have a game with a high RTP that has lower volatility. The theoretical RTP may also change depending on a number of factors.