What Are Hold & Win Slot Games?

The online gambling industry is very competitive. Many developers of online casino content want to reach and stay at the very top, but that’s, by all means, a difficult task. It requires keeping the portfolio of games fresh and concurrent.

Another important goal is innovation. Online slot players are always hungry for excitement, while innovative game features can make all the difference. Just look at what Big Time Gaming did with Megaways.

Over the recent years, a number of new features have been made available, promising players to enhance their playing experience and deliver staggering prizes. One of those features is Hold &Win, which has recently become very popular among slot lovers of all types.

About Hold and Win

Hold and Win is regarded as one of the more accessible features. It’s equally appealing to fans of traditional games and those who prefer modern releases.

The first Hold and Win title that captured the players’ attention was Money Train, a game by Relax Gaming. However, the feature started gaining more popularity in 2019, after the sequel to this title hit the market.

Since then, many slot developers, such as Booongo, iSoftBet, Playson and Booming have launched slots with the Hold and Win feature. Today, Hold and Win casinos offer a wide range of exciting games.

How Does It Work?

The feature works in a simple way. It requires a specific number of bonus symbols to land on the reels to unlock the round and award three respins. The triggering bonus symbols stay on the reels, while any new ones appearing will become sticky and reset the number of respins.

It gets even better, as collecting a certain number of bonus symbols awards one of four fixed jackpots on offer. The size of those prizes is shown above the reels, so players can see what kind of rewards they may expect.

As we already mentioned, the number of games boasting the Hold and Win feature is on the rise. The list of popular games you play at your favourite Hold and Win casino includes such popular titles as Dragon Pearls: Hold and Win and Buffalo Power: Hold and Win, which hit the market in 2019 and 2020, respectively.

Here are some of the recently-launched titles that come with this exciting feature: 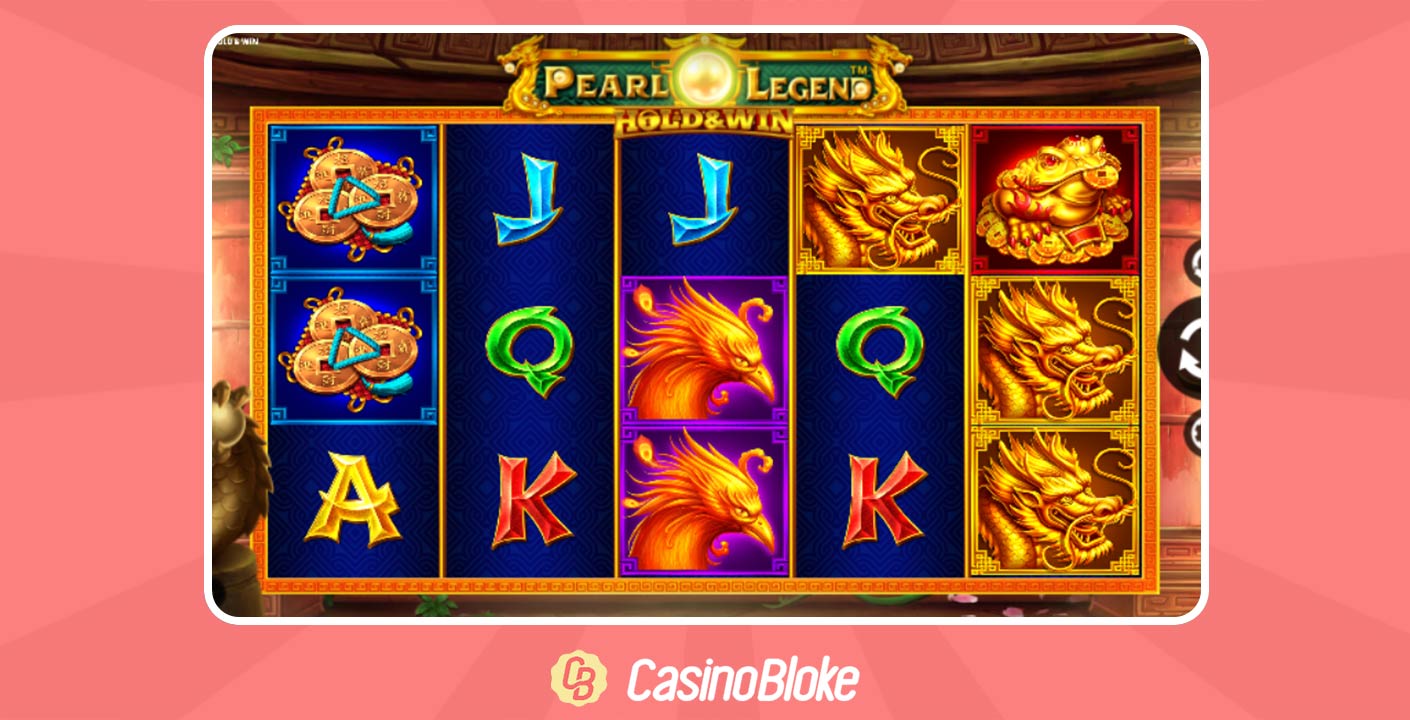 The game uses a popular Chinese theme, with the reels set in a pagoda with a golden dragon standing next to the reels. The design is well-executed and perfectly captures the spirit of the Orient, while the soundtrack compliments the theme and helps create an immersive atmosphere. A five-by-three grid dominates the view, with twenty active lines. The average RTP is 96%, while medium volatility promises well-balanced payouts. Players can place bets ranging from $0.20 to $20 per spin, with maximum prizes going up to 8,230 times the stake. Recognisable Chinese symbols populate the reels, with a standard mixture of low-value and higher-paying icons.

The standard Hold and Win feature is enhanced with Reel Boosters. There are four of them, and they deliver a wide range of benefits. Some unlock additional rows, while others can increase the size of the Pearl symbols, add more spins to the counter or improve the multiplier.

Play this exciting game by iSoftBet at the Genesis online casino!

The prairie awaits in this thrilling Hold and Win title from Booming Games. It’s played on a five-reel, three-row grid, with a total of 25 paylines to award payouts. As far as the theme goes, it has been already used, but that will hardly spoil your playing experience. On the reels, you’ll encounter images of majestic animals such as bulls, lions, eagles and wolves, together with the usual set of low-paying Royals.

Although the list of features includes Wilds, Scatters, and a Free Spins round, the star of the game is Hold and Win, where you can claim jackpots worth up to 1,000 times the bet. The volatility is medium, with a relatively low payout percentage of 95.91%.

Check out the Buffalo Hold and Win game at PlayOjo! 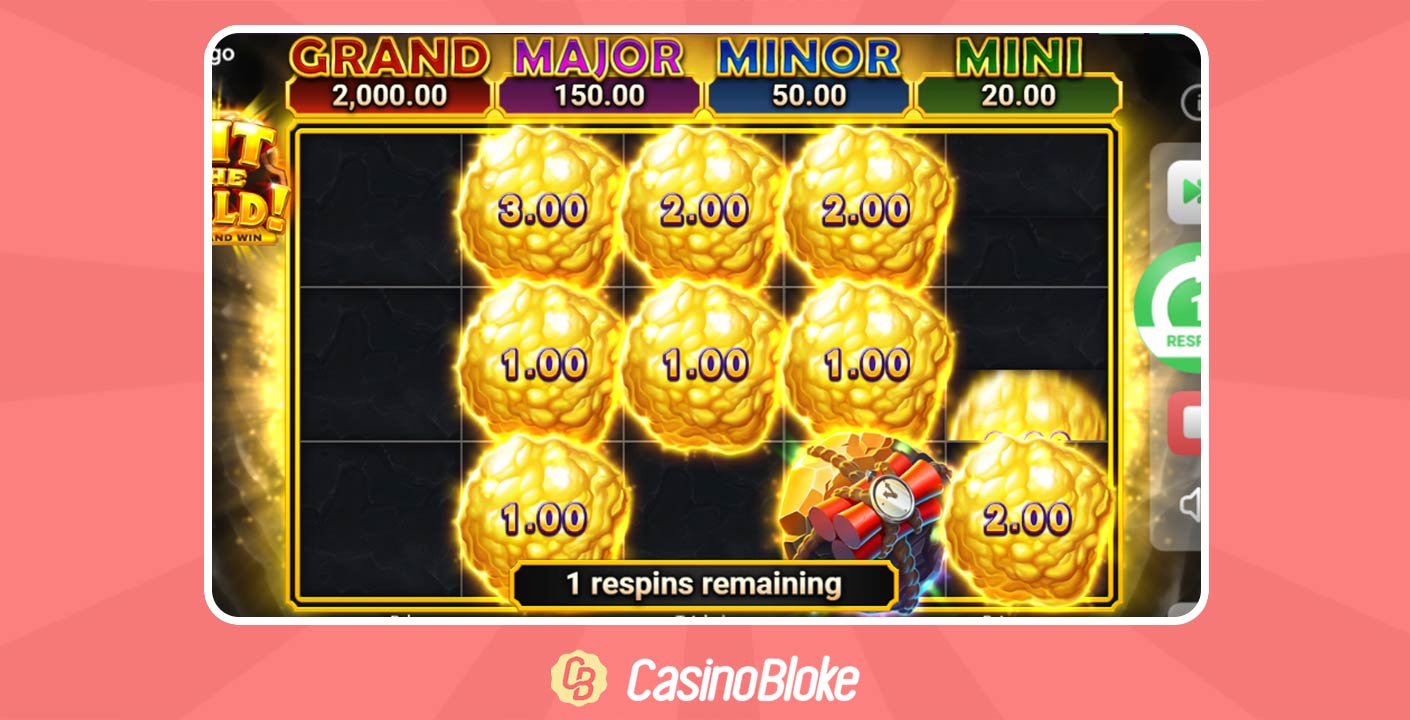 Booongo is giving you a chance to become rich in this thrilling release filled with gold and adventure. Set on a five-by-three reel set with 25 paylines, the game invites you to take a shot at claiming huge prizes. Be on the lookout for Scatters, as three of a kind trigger the Free Spins round and award eight spins. Things heat up when you collect six gold ore symbols. It will unlock the Hold and Win feature, which starts with three respins. Every additional gold ore landing on the grid resets the number of respins and further increases your odds of scooping staggering wins.

The mystery dynamite symbol available in the bonus game can turn into a Mini, Minor, or Major icon, awarding a corresponding jackpot prize. Together with the gold ore, they stay sticky in the Hold and Win feature, allowing players to claim the Grand Jackpot worth 2,000 times the bet. Hit the Gold comes with crisp visuals, mesmerising soundtrack, and an immersive atmosphere.

This thrilling five-reel, three-row release with 25 paylines will take on an adventure of epic proportions. Find the ancient temple and uncover hidden treasures. Your company on this journey is the princess of Egypt. She acts as the Scatter, with three of a kind landing anywhere on the reels awarding ten spins. But that’s just the beginning. During the round, Wilds turn into multiplier Wilds, doubling any winning combination you create.

The scarab-sphere is the symbol you’ll be keeping your eye on. Collect at least six to trigger the Hold and Win feature and receive three respins. Any additional scarab-spheres will reset that number. Collect fifteen of them, and you’ll be handsomely rewarded with the Grand Jackpot of 5,000 times the bet. But remember, there are three other jackpots as well, although the maximum payout they award is worth 150 times your stake. The fun doesn’t end there, as mystery scarab-sphere symbols unlock the Boost feature, adding up all bonus symbols to the winning round.

Thousands of amazing slots with innovative features await at Jetbull!

Developers at Booongo love Asian-themed games. Take the popular theme and combine it with the Hold and Win feature and you get a smashing hit. Starring the legendary Monkey King, this uses the standard reel set and has 25 paylines for players to benefit from. Three Heavenly Arches on the three middle reels activate the Free Spins round, granting eight spins. Any additional Scatters will add more to the count, while only higher-paying icons appearing on the grid further boost the round’s win potential.

Six gemstones are your ticket to the Hold and Win feature. You’ll have three respins to get as many gemstones as possible. If another one lands on the reels, it will reset the number of respins. Fill all fifteen positions to claim the Grand Jackpot of 5,000 times the stake. Pay attention to mystery symbols, which can award one of the three remaining jackpots or accumulate all cash totals once the round comes to an end.

If you like these games and would like to test them, visit some of the trustworthy online casinos we’ve selected and reviewed for you.