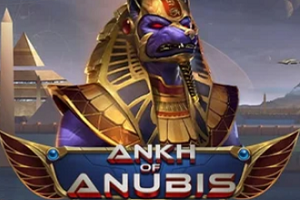 We are going back in time, to the era of Anubis, the mighty Egyptian deity that ruled Egypt for centuries. Even though he looks scary, the god of the dead is extremely generous to his subjects and will allow you to pocket up to 15,000 times the bet. Ankh of Anubis is a five-reel video slot that benefits from 576 ways to win. Visually impressive, the 2019 release offers two rewarding additional features, including Anubis Wilds, triggered randomly, and the Free Spins feature with up to 20 freebies, to begin with. It is possible to get unlimited extra free spins.

The reels are set in Egypt of 3,000 years ago and we can see by the look of the settlement that the Egyptians had some pretty advanced technology, which probably helped them build the pyramids. Anubis was the ruler of the country back then, and he acts as the Wild that substitutes for all regular icons. The Golden Pyramid is the Scatter that triggers the Free Spins feature. Apart from the Golden Ankh, which is the highest-paying regular symbol, you will also see the Golden Scarab, Golden Bracelet, and the Golden Amulet. Playing cards act as low-value icons.

If you obey the rules and worship the god of the dead, you will have no problem at all finding your way around, since the 2019 release is not as complicated as you may think. The Play’n Go title features five reels, with a 3-4-4-4-3 reel formation, offering 576 ways to win. In order to land payouts, gamers need to land matching symbols on successive reels, starting from the far-left reel. Three of a kind is the minimum for landing payouts. Betting is fixed at 10 coins per spin but, due to the fact that the coin value can be altered, gamers can wager from £0.10 to £100 per single spin.

The Anubis Wild feature is triggered randomly during the base game and here the god of the dead rewards spinners with randomly added Wilds on random positions on the reels. Wilds can cover from 1 cell up to the entire row.

We have mentioned in the beginning that Anubis is a very generous ruler and will give you up to 15,000 times the bet in a single spin. He is also the symbol that pays the most, offering 10 times the bet for five of a kind.  The Golden Ankh is next in line, offering 5 times the bet for the maximum combination. Ankh of Anubis’ RTP is 96.2%.

Ankh of Anubis on Mobile

Time travel is still not an option, at least for us common people. Fortunately enough, you will not need a time machine to visit Egypt in the era of Anubis. The Play’n Go product is playable across all devices and can be enjoyed on desktops, laptops, mobile phones, tablets and other compatible handheld gadgets.

+ Anubis Wilds feature adds plenty of Wilds on the reels

+ Lots of free spins on the offer

– Could use more authentic symbols

The mighty Anubis appears in all his glory in the 2019 release! The generous god will reward you with up to 15,000 times the bet in a single spin. The Play’n Go product houses amazing graphics and an excellent soundtrack. The features incorporated proved to be extremely generous, at least in our case. The Anubis Wilds feature will get you plenty of Wilds, both in the base game and the Free Spins feature and you can really win big. On the other hand, the theme of the game is quite common, while it will take you a while before you start triggering features. Ankh of Anubis is definitely one of the games you should try in 2020.