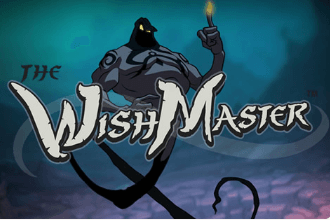 If you have ever wanted to know how Aladdin felt when he discovered the Magic Lamp and met the Genie, then you should definitely have to try out The Wish Master, a five-reel, 20-payline video slot brought to us by the good people of NetEnt. Playable from £0.20 per spin, the 2014 release will take us in a secret cave, hidden in the middle of the desert, where you will rub the Lamp and summon the Genie. Let the Genie escape from his lamp and he will reward you with 10 free spins, along with some tasty extras that will be added to freebies, including Wild Reels, win multipliers, expanding Wilds, Extra Wilds, and Random Wilds.

There are so many similarities with Aladdin. For example, the reels are set next to the Magic Lamp, and the Lamp is hidden in a secret cave packed with gold. Symbols on the reels include precious gemstones, like a Cobra made from Rubies, a Rabbit formed of Emeralds, a Jade Scorpio and a Sapphire Raven. Playing cards are used as low-paying symbols. The Wild is used to substitute for all regular symbols, while the Magic Carpet acts as a Scatter and a Magic Lamp is drawn on it. Once it lands, it may happen that the Genie escapes from the Lamp and award you with free spins.

The rules of the game are the easiest part of this fantasy story. The NetEnt title features five reels, three rows and benefits from 20 fixed paylines, which pay left to right, starting from the leftmost reel. Land at least three matching symbols on a payline and you will start winning payouts. Betting starts at £0.20 per spin, but the coin denomination can be altered and also, gamers can pick the desired Bet Level (1-10). Choose for yourselves whether you want to spin for the minimum price, or to wager up to £100 per single spin.

The only additional feature offered by the 2014 release is the Free Spins feature. Land a Magic Carpet Scatter anywhere on the reels and help Genie escape the lamp and he may (or may not) reward you with 10 free spins. Also, he will spice the freebies up a bit, adding extras, like Extra Wilds, which will turn corresponding high-paying symbols into Wilds, Wild Reels, which appear on the same reel as the Scatter that triggered the feature, expanding Wilds, which will cover entire reels when they appear on the screen, 2x and 3x multiplier, which can combine and form a 6x multiplier, and random Wilds, with two floating Wilds appearing on the reels on random positions. Now, gamers can get one or more of the extras during the Free Spins feature. If you retrigger the feature during free spins, you will get 5 extra freebies. It is possible to retrigger the feature up to two times, so you can expect up to 20 free spins at once.

If you are good to the Genie, he will do everything in his power to help you land up to 900,000 coins in a single spin, which is the maximum possible payout. The free Spins feature is where you can expect massive wins, thanks to plenty of extras that can be added to your freebies, including Wild Reels and win multipliers, which can go up to 6x. The Wish Master’s RTP is 96.6%.

The Wish Master on Mobile

Thanks to the powerful Genie, who is here to fulfill all of our desires, the NetEnt product is playable across all devices. This means that it can be enjoyed on desktops, laptops, mobile phones, tablets and other compatible handheld gadgets. The Genie made sure that the gaming experience is completely the same on any device.

+ Free spins with lots of extras

The Wish Master is definitely not the best video slot NetEnt has to offer, but, also, it is not the worst game out there. The 2014 release boasts crisp graphics and a fitting soundtrack, while the Free Spins feature is packed with extras that can help you land massive wins. If you get a combination of Wild reels and win multiplier, you are in for a real treat. Remember that it will take time before you help Genie escape the Magic Lamp and that he decides for himself if he wants you to reward you with freebies or not, which is not that good from time to time.