Saucify was initially founded under the name of BetOnSoft in 2006. Seeing a company within this particular industry change name usually creates an impression something went wrong with the original brand. It’s not the case here, and frankly, we would have advised a different one to start with. I mean, doesn’t BetOnSoft sound too much like BetSoft and iSoftBet?

To cut a long story short, the reason the team has decided to go for rebranding (which, btw, happened in 2014), was to choose a name which represented everything the company stands for, namely dynamism and originality which makes them different to many “bland brands” within the gaming industry. “Saucify” is supposed to indicate their intention to spice up the industry and add excitement and flavour to the casino games market, and Casino Bloke for one believes they’ve done a pretty good job so far.

Saucify has built a reputation of being a very trustworthy provider, and rather than having their software regulated in one jurisdiction, they’ve opted for meeting the regulations in several different jurisdictions. They power 20+ casino brands, make their software available in 9 different languages and allow9 different currencies. Although the company’s headquarters are in Curacao, the firm holds offices in the United Kingdom, Malta, Vietnam, South Africa, New Zealand and Canada.

All Saucify games are Flash-based which means they’re just as accessible to players using Windows, Mac or Linux – all one needs is an internet browser and a connection. Mobile play is enabled on a variety of smartphones and tablets, including iOS and Android mobile devices, Windows and Blackberry. Their games are continuously tested to ensure they deliver random results and there’s a certificate issued by reputable iTech Labs to vouch for it. Therefore, no wonder some of the world’s biggest casino sites teamed up with this developer. 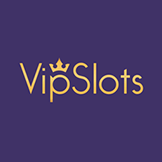 If you have not made a deposit at VipSlots, once the wagering requirement is completed, a deposit must be made to register a payment method with your account before you can withdraw any winnings. Your deposit will be refunded along with your winnings. 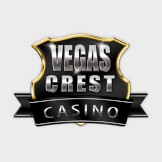 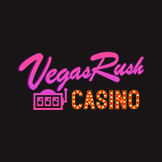 All the Vegas Rush Casino deposit and free chip bonuses are subject to our bonus terms and conditions, unless explicitly stated otherwise. Back to back free chip between deposits may limit or void your chance of cashing-out. The Player is entitled to only one free chip in between deposits; any winnings resulting from multiple free chips will be void. For example, if a Player wants to redeem two free chips in a row, players will not be able to withdraw any winnings generated by playing on said chips. The casino reserve the right to make exceptions on the Withdrawals approvals. For further questions please contact Customer Service.

Our Rating of Saucify

Anyone who has taken advantage of good online casino bonuses knows that promotions can make the gambling experience so much better. Saucify bonuses are not that hard to come by, as newly registered casino players can enjoy no deposit bonuses on Saucify games, as well as first deposit offers.

Apart from match deposit deals, which are usually the most common, punters will also find slots tournaments, loyalty programs, free spins offers and regular promos. Whatever the case may be, wagering requirements and the terms of the bonus will need to be adhered to, so be sure not to skip reading them. You’ll see, Saucify casino games come with superb player rewards. 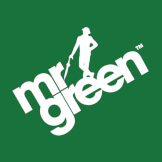 If you look at most online casinos powered by mediocre providers, you’ll note that some of them have poorly managed bonuses, this is not the case with Saucify and the majority of its partner operators. To activate some of the recommended promotions you’re required to simply enter codes in the bonus section of the cashier tab. Just don’t forget to overview the terms and the requirements of playthrough. You’ll see that the bonuses on Saucify games are incredibly easy to enjoy. You’ll probably find different tournaments on offer the most attractive.

Saucify does offer a range of classic fruities, but the majority of their online slot games consists of multi-reel video slots which frequently use 3D graphics. They’ve got a strong visual appeal, especially when it comes to the new titles. and the developer has certainly made an effort to “spice things up” by using unique themes unlike those abundantly exploited by many of their competitors.

A good number of Saucify slots testify to the company’s focus on innovations. You’ll see random wilds shoot onto the reels in Buck$y Malone and dropped with the help of magical dust in Lucky Leprechauns. Spin16 gameplay allows players to spin the reels in any vertical or horizontal direction, their choice also defining the position of multipliers. Arcadia i3D provides a totally unique gaming experience with a 3D game unlike any you’ve seen before – the game area is designed as a factory, and instead of reels spinning to deliver matching icons, 3D toys are coming out of 5 factory doors in threesomes. Absolutely bonkers! 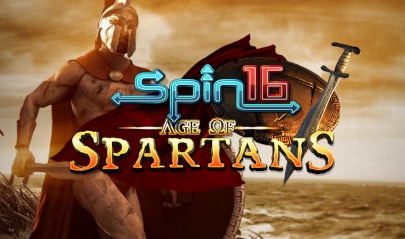 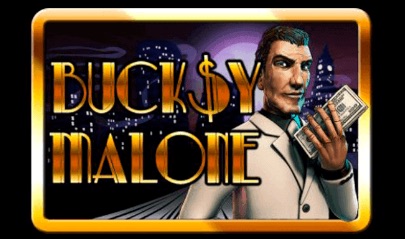 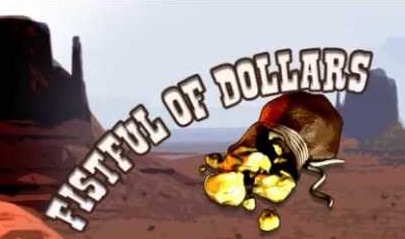 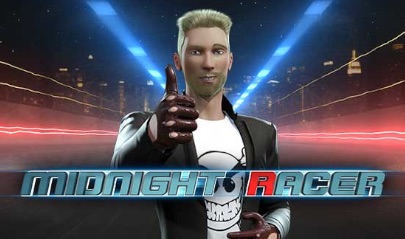 The RTP in Saucify’sonline slot machines is pretty good overall, ranging from 94.23% way to 98.40%. Legends of Avalon has been recorded with an RTP of over 98% and stands as the highest paying slot from this experienced software provider. As for the titles which count on a percentage of 97% or higher, you can take a look at slots like Dollars Down Under or Stars and Stripes. If none of these are the right match for you, there are also slots like Sweet Success, Aladdin’s Loot or The Last Pharaoh, with the return rate going above 96%.

To date, Saucify has produced more than 100 classic and video slots, table games, video pokers, and specialities, and in 2011 they’ve also launched multiplayer tournaments. We can’t honestly claim every single one of their products features impeccable quality, but while the company’s early work may not have been outstanding, they have produced numerous top-notch games during the past few years. What you’ll see these days are high-quality graphics and animations which come combined with a wide range of special features.

When it comes to Saucify, everybody and his uncle are mentioning October 2010, which is when the company released 13 new games simultaneously. You may call that odd, they might have considered it as an attempt to create disruption. Or make the headlines, which they clearly did.

Anyway, Saucify are here to create some ripples and make some noise. If we are to make any judgement by some of their most prominent game titles, looks like they have succeeded in their mission. 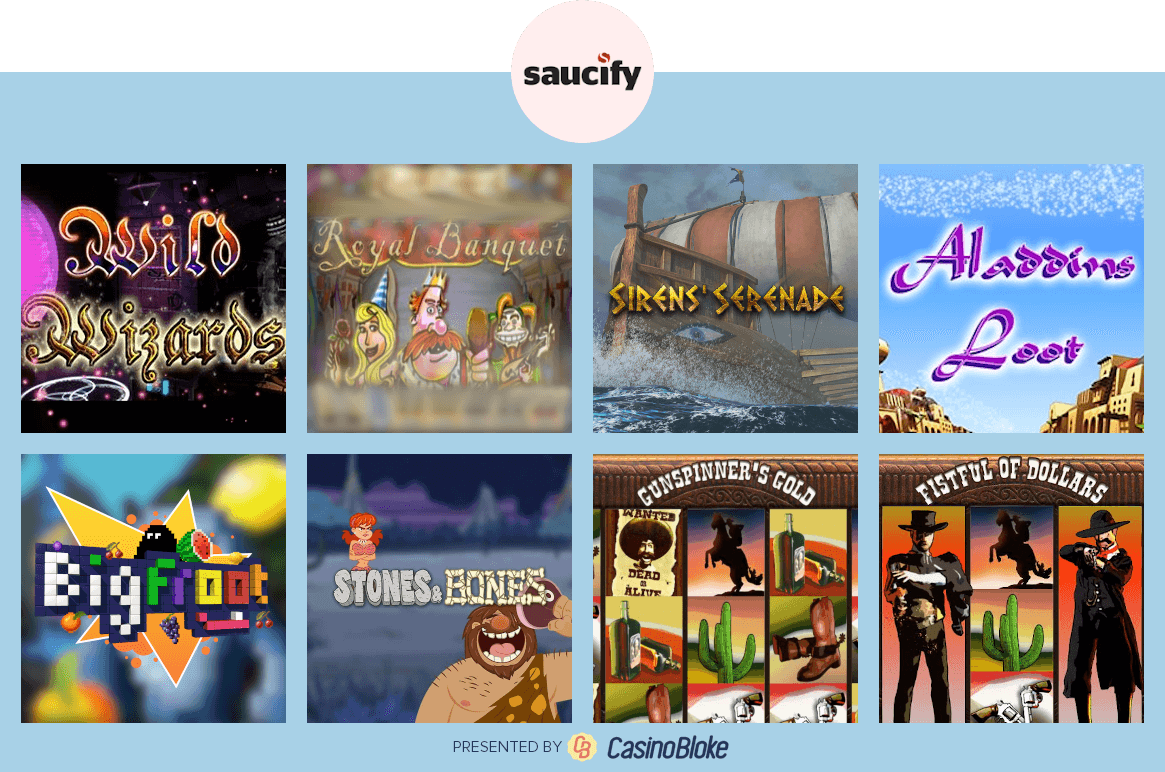 Saucify doesn’t boast a particularly large collection of table games, but on the plus side, they all look extremely good – possibly the best looking games you’ll find these days. The range consists of several roulette and blackjack variants, baccarat, Three Card Poker and Craps.

There are 5 progressive jackpot slots currently available from Saucify. The jackpot amounts may not be as high as what some of the other, more popular slots deliver, but the games are solid-built, very fun to play and the jackpots can still reach to high six-figure totals. The titles of Saucify progressives are Cash Flow (appropriate), Dream Wheel, Legends of Avalon, Molten Moolah and Rocket Jacks. Dream Wheel is a 3-reel classic, which also comes in a 5-reel version with 15 paying lines instead of 1. The biggest Saucify jackpot win so far was worth $272,106 and it was awarded on Legends of Avalon in 2016.

On top of the games mentioned above, Saucify additionally provides a selection of scratch cards, keno, and a number of single and multi-hand video pokers. Among the latter, you’ll find Jacks or Better, Aces & Faces, Joker Poker, Bonus Deuces Wild, Deuces & Joker Wild, Bonus Poker Deluxe and Triple Double Bonus. A decent lineup that provides some variety for casino visitors who like Saucify software but don’t just play slots all the time.

Not yet! It would be quite a surprise to see a live dealer game developed by Saucify. The Bloke has no reason to believe anything like it would ever happen. The company seems content with the direction they have been going in for the past few years and live casino content is not on that path. That’s no reason for sorrow, though, as various other providers develop live casino products and do a stellar job.

Are you familiar with the name of Steve Wozniak? For those few who have never heard of this world-renowned computer freak, let us explain: Mr Wozniak was one of the guys who founded Apple and the inventor of Apple II computer. So what does this genius have to do with Saucify, you may ask. Well, Saucify’s products and platform have been described as “visionary” by Fusion-io, the company that has Steve Wozniak (co-founder of Apple) as its Chief Scientist. Obviously, a company that is kept in such high regard by the Woz deserves to keep an eye on.

OUR VERDICT ON SAUCIFY

Saucify software has found its way to a couple of dozen online casinos thus far, and they are even the primary content provider at several of them. They’ve launched over a hundred games, delivering everything from video slots to roulette, blackjack, video poker and scratch tickets. Saucify may be missing from some of the most popular online casino websites, but you can be sure that any web casino that features their games is licensed, regulated, safe and reliable. If you need a bit of sauce in your gaming life, seek out Saucify online casinos – how could one possibly go wrong?

A fair and secure gaming environment for clients is one of the priorities at Saucify. Certificates for fair gaming have been obtained, issued by accredited testing authorities. Their RNG is tested on a regular basis to ensure that game results always remain fair and random. Player security is also taken into account and the best encryption software is used to ensure that all player data is kept safe.

Saucify, as a casino software provider brand, is relatively new addition to the industry, but the company behind it is almost considered a veteran. The firm started operations back in 2006 by the name ofBetOnSoft. The company rebranded itself to Saucify in 2014. SinceBetSofthad a very similar name, the need for a name change soon became obvious. The company continued to make awesome games, though.

Saucify games created to work smoothly on any platform or operating system and like many other providers, the company uses HTML5 software, meaning you can play them directly on your mobile device of choice. Simple yet bright designs and quirky animations work across a number of platforms and look lovely on a smartphone's smaller screen.

We can understand why you would want, before gambling for real money, to try Saucify’s online casino games variety for free in demo mode. Many Saucify online casinos enable demo play, so feel free to pick out a site that the Bloke has previously suggested above.