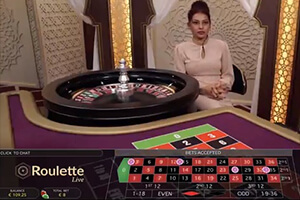 Evolution Gaming is one of those developers that never cease to amaze us. Only a couple of months have passed since they launched Lightning Roulette, a superbly-designed European Roulette game with staggering multipliers of up to x500 (a roaring success, by the way), and the company is already treating the online gaming community to a new first and once again proving how seriously they take their leadership status.

Recently released Live Arabic Roulette joins numerous other native game variants within Evolution’s portfolio. Native dealers have so far been available to residents of Germany, Spain, UK, France, Italy, Belgium, Greece, Turkey, Russia, as well as each of the Scandinavian countries, and the same privilege is now offered to Arabic-speaking players.

Instant Transfer to the Land of Aladdin and Scheherazade

While usually using subtle symbols to indicate which market their native game is catering to, like applying colors of the national flag or using a backdrop depicting the country’s capital, with Arabic Roulette Evolution Gaming went all the way.

The decor inspired by the Middle East serves as a magic carpet which will instantly transport players to the world of beautiful Scheherazade and resourceful Aladdin. If you happen to be a resident of one of the targeted countries, it will make you feel right at home, except for the fact there will be no fear of engaging in an illegal and potentially punishable activity.

Native Arabic dealers are obviously a major contributor to the quality of your gaming experience, with a role which may be even more important than that of their colleagues from other markets.

These well-trained professionals are fully cognizant of Arabic gambling etiquette as well as subtleties of the local culture. Live Chat function, included in every Evolution live gaming product, makes it possible to communicate with charming male and female hosts in your own language.

All which we know and love in Live European Roulette by Evolution Gaming is still here, and an extensive customization delivered as a cherry on top. An intuitive interface makes it easy to find and use helpful game options, with discreet menus positioned so that they in no way obstruct the view of the table.

Buttons in the top right corner offer players to adjust video and audio settings to their liking, access their personal history and double-check game rules whenever they wish. The betting area positioned immediately below live feed allows them to place wagers using the traditional layout or a Racetrack.

Additional options enable saving of the player’s favorite bets and placement of special ones like Finales A Cheval, Finale En Plein and Complete Bets. An easy-to-read overview of the last 500 rounds displays the list of winning numbers and their hit frequency, as well as percentages per dozen and column, Red/Black, Odd/Even and High/Low.

Streaming quality is hardly worth a mention, simply because Evolution always delivers their games flawlessly. The video is consistently sharp, even in full-screen view, and sound perfectly synchronized. What you’ve got is an incredibly realistic land-based gambling replica which, in this particular case, comes with an authentic Arabic flavor.

Eager to give this exciting game a shot? Then head over to Mr Green or visit LeoVegas, two impressive gaming venues that offer Live Arabic Roulette among many other live dealer titles.