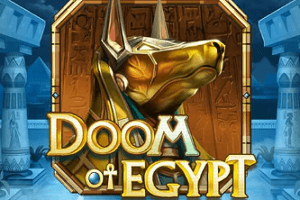 Pharaohs Ramses, Thutmose and Amenhotep are back from the dead and are accompanied by the god of the dead, Anubis. The army of the undead pharaohs is on the loose, and it will be up to you to stop them and claim up to 250,000 coins per single spin. Doom of Egypt is a five-reel, 10-payline video slot that offers a Free Spins feature with expanding symbols, which are randomly chosen. Playable from £0.10 per spin, the 2019 release offers a Blue Scarab Scatter, which triggers the Free Spins feature, but is also the Wild that can substitute for all regular icons.

If you want to try out the Play’n Go title, you will have to enter a mysterious tomb, but watch out for the undead pharaohs, like Ramses, Thutmose and Amenhotep, which are back from their graves. We suppose that the ancient god of the dead, Anubis, brought them back to start the doom of Egypt, so they need to be stopped. The Blue Scarab acts both as the Scatter that triggers the Free Spins feature and as the Wild that substitutes for all regular icons. Generic playing cards are used for low-value symbols.

As for the rules of the game, they are as easy as breathing. The 2019 release features five reels, three rows and benefits from 10 adjustable paylines, which pay left to right, starting from the leftmost reel. Gamers can choose for themselves how many paylines they want to play with, but we advise everybody to use all lines, simply to boost their winning chances. Three of a kind is the minimum for landing payouts, except when it comes to high-paying symbols and Wild/Scatter, which will pay even for two of a kind. If you use all 10 paylines, you can wager as low as £0.10 and as high as £50 per spin.

When three or more Scarabs appear on the reels, the Free Spins feature is triggered. Gamers will get 10 freebies to begin with, while the feature can be retriggered. Before the free spins start, one of the regular symbols will be randomly chosen to become the expanding symbol during the feature. The expanding symbol will have the ability to expand and cover the entire reel when there is a possibility to land a winning combination. Furthermore, the expanding symbol will pay as a Scatter, meaning that it only has to land on an active payline, not on successive reels.

The maximum possible payout is capped at 250,000 coins per single spin. The Free Spins feature is where you can expect hefty payotus, thanks to special expanding symbols. Anubis is the icon that pays the most, offering 5,000 coins for five of a kind. The Scarab Wild will get you the same amount for the maximum combination. Doom of Egypt’s RTP is 91.25%.

Doom of Egypt on Mobile

Doom of Egypt is a video slot that can be played across all devices. The good people of Play’n Go made sure that the 2019 release is available for all sorts of players. Battle against the undead pharaohs from the comforts of your homes or on the go, and be sure that the quality of the game is completely the same on any compatible gadget.

To be completely honest, we expected much more from Play’n Go in the Doom of Egypt video slot. Of course, the 2019 release boasts crisp graphics and a fitting soundtrack, while the Free Spins feature comes with the special expanding symbol, randomly chosen. On the other hand, the Play’n Go title could use a bit more action, especially because the undead pharaohs and a god of the dead are on the loose. Also, there are definitely more than enough video slots with a similar topic and we can pick out plenty of games that we would prefer playing than Doom of Egypt. Even so, if you are a fan of simple video slots with no complicated additions, you should try out the 2019 release.