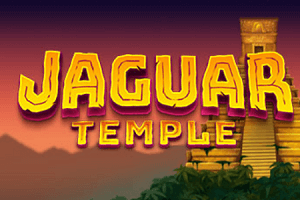 Jaguar is one of the most important deities in Inca’s culture, because the feline was a symbol of strength and protected people from evil spirits. Thunderkick took the theme for their newest video slot from Inca mythology and developed Jaguar Temple, a five-reel, 20-payline video slot that houses crisp graphics and a fitting soundtrack. The 2018 release allows gamers to win up to 2,045 times the bet per spin and you can enjoy up to 40 free spins in the Bonus feature, which comes with Expanding Wilds. The main attraction is the Jaguar symbol, which pays the most and can also appear in 3×3 size.

When it comes to symbols populating the reels, there are several animals that are important in Incas mythology. Since the reels are located in the vicinity of an ancient temple, everything is made of stone blocks. Jaguar is the most important symbol of the Thunderkick title, but gamers will also come across Birds, Dogs and Rabbits. As for the low-value icons, simple card suits were used. The Wild symbol is also there, in the form of an Inca Priest, which, during the Bonus feature, can appear as an Expanding Wild on the three central reels. The Bonus Scatter triggers the Bonus feature. 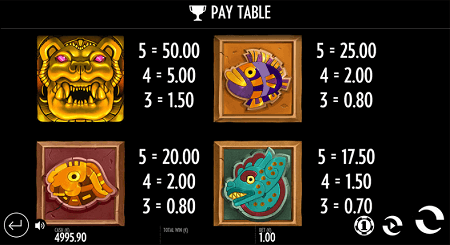 All of you who ever played some of the Thunderkick products will have no problems at all understanding the rules of the game. The 2018 release features a standard 5×3 layout and benefits from 20 fixed paylines, which pay left to right, starting from the leftmost reel. Three of a kind is the minimum for landing payouts. Gamers can bet as low as £0.10 and as high as £100 per single spin. The control panel is very simple to use, because it offers all the standard options that can be found in most of the recent Thunderkick titles.

This is the most interesting part of the Jaguar Temple video slot. Gamers need to land three or more Bonus Scatters in order to trigger the Bonus feature, which is basically a Free Spins feature. Depending on the number of Scatters landed, punters will get 10, 15 or 20 freebies. However, it is possible to retrigger the feature and get up to 20 extra free spins. During the feature, the Jaguar 3×3 symbol will appear more often than in the base game. Also, the Wild becomes an Expanding Wild and appears only on the three central reels, meaning that gamers can get up to 3 Wild reels in a single spin. 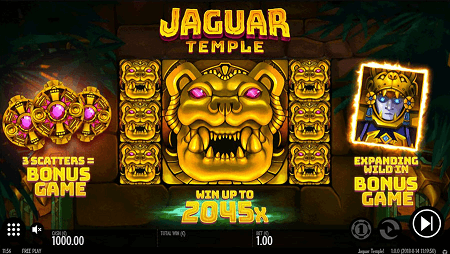 The biggest possible payout spinners can expect in the Thunderkick title is set at 2,045 times the bet. Use max bet and you can pocket up to £204,500 in a single spin. The Jaguar pays the most, offering 50 times the bet for five of a kind. The 3×3 Jaguar block will help you land massive wins, as well as the Expanding Wild in the Bonus feature. Jaguar Temple’s RTP is 96.1%.

Thunderkick developed a video slot that boasts awesome graphics and a quality game play. The 2018 release can be played on desktops, laptops, mobile phones, tablets and other compatible handheld gadgets and the gaming experience will be completely the same on any device, allowing gamers to explore the ancient Inca temple anytime, anywhere.

+ Expanding Wilds in the Bonus feature

In the very beginning, we have to be completely honest and say that this is not one of the best Thunderkick titles, simply because, in our humble opinion, it lacks action. On the other hand, the visuals are excellent, as well as the soundtrack. The central attraction of the 2018 release is the Bonus feature, with up to 40 freebies, Expanding Wilds, Wild reels and 3×3 Jaguar icons, and it will result in massive payouts, up to 2,045 times the bet, if the old gods are on your side.