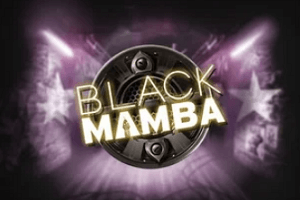 Play’n Go is inviting all rock fans among gamers to go to the concert of Black Mamba, a famous Italian rock band, where they will be enjoying the Solo performances of Alexandra, Cecilia, Fred and the frontman, or better to say frontwoman, Martina. Also, they will perform a Concert feature, but in order to do so, punters need to charge the meter. Black Mamba is a five-reel video slot that benefits from cluster pays and cascading reels, and once you clear the reel grid, you will trigger the Free Spins feature. Visually impressive, the 2019 release is playable from £0.20 per spin.

We are sure that there will be spinners who haven’t heard about this amazing Italian rock band, so we will introduce the members. Martina is the lead singer and the Wild that substitutes for all other symbols, doubling wins when part of a winning combination. Fred plays the drums, Cecilia is the bass player and Alexandra is on the guitar, all of them acting as high-value icons. You can even combine all four band members to land wins. Black Mamba is the regular Wild that substitutes for all symbols on the reels. Also, you will see Drumsticks, Headphones, Microphones and Guitar Picks.

In terms of the rules of the game, there are a couple of things you need to remember before you start spinning the reels. The Play’n Go title is a five-reel, five-row video slot that benefits from cluster pays. Make a winning cluster of three or more matching symbols and you will win payouts. Thanks to cascading reels, the winning symbols will be removed from the reel grid and your goal is to clear the grid to trigger free spins. Also, every successive win will increase the win multiplier, which resets to 1x after a non-winning spin. Gamers can bet as low as £0.20 and as high as £100 per spin.

Band members can perform Solo features on non-winning spins in the base game, all except Martina. Alexandra will destroy two sets of any symbols on the reels. Cecilia adds up to 2 Wilds on the reels, while Fred transforms one set of symbols into another set of icons. Collect 4-6 band members symbols on the reels and you will trigger the Concert feature, where all four members will take turns performing their Solo features. Here, Martina will appear in the end and will destroy the bottom row of symbols, leaving only Wilds in it. Also, she will replace one band member on the reels.

Once you clear the entire reel grid, you will trigger the Free Spins feature. The active band member will play a Solo feature on every spin, while Martina appears on each freebie. Win multiplier will keep increasing and the Charge Meter will help you get more free spins. Four or five charges will secure you 2 extra freebies, while six charges will get you 4 additional free spins.

The biggest payout gamers can expect in the 2019 release is set at 5,000 times the bet in a single spin, which is not bad, especially if you set the bet to the max. The increasing multiplier and all of the features incorporated will really help you land big wins. Black Mamba’s RTP is 94.5%.

The rock band is often on a tour, so you will not be able to find them in Italy every time you try. To be on the safe side, you can let them rock your brains out on desktops and on mobile gadgets because the Play’n Go title is playable across all devices.

After NetEnt’s rock video slots, there is one more iGaming giant who decided to develop an action-packed game with a popular theme, so now rock fans will have a difficult time deciding which video slot to play. We really liked testing Black Mamba, because it offers some exceptional additional features that give spinners more than enough opportunities for big wins. Even though the Italian rock band is not as popular as Motorhead, Jimi Hendrix, or Guns N’ Roses, they will get more and more fans on a daily basis thanks to the 2019 release.