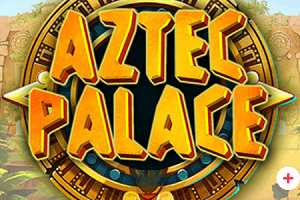 Aztec civilization is one of the biggest mysteries of the modern age. Even though we know a lot about them, there is still plenty to be learned. Booming Games will help us with that, thanks to their 5-reel, 20-payline video slot called Aztec Palace, which will take us deep into the jungle, where a forgotten palace is still standing and hiding lots of secrets and treasures. Expect to meet plenty of nobles from that period, and to enjoy several rewarding features, including Bursting Wilds, Pick a Skull, with instant wins, and the Free Spins feature, which offers up to 12 freebies without low-value icons.

We are not experts in the field of Aztec civilization, so we cannot tell you a lot about the history of this mysterious palace where the reels are set, but we can tell you something about the symbols populating the reels. We have the King leading the group, followed by a Shaman, a Skeleton, and something that looks like a Snake deity. Even the low-paying playing cards are made from stone dragon pillars. The Wild will substitute for all regular icons. The Bonus Scatter triggers a Pick a Skull feature, while the Free Spins Scatter triggers freebies. The Bursting Wild can cover up to 8 cells.

If you had the pleasure of playing other Booming Games products than you will have no problem at all understanding the rules of the 2019 release. Aztec Palace features five reels, three rows and benefits from 20 fixed paylines, which pay left to right, starting from the leftmost reel, with three of a kind being the minimum for landing payouts. Betting is fixed at 20 coins per spin, but the coin denomination can be altered, so you can wager as low as £0.20 and as high as £400 per single spin. Such a wide betting range will certainly attract both penny punters and those looking for an expensive thrill.

The Bursting Wild is quite common in Booming Games titles and it always explodes in order to cover up to 8 cells with Wilds. The Free Spins feature is triggered once at least three Free Spins Scatters are landed on the reels. Depending on the number of Scatters landed, players can trigger 8, 10, or 12 freebies. During the feature, all low-paying icons are removed, so you only have high-value ones, as well as Wilds, Bursting Wilds and Bonus Scatters, which trigger the Pick a Skull feature. Pick a Skull can be triggered both during the base game and during freebies. If triggered in the base game, players get three skulls to pick from, while in freebies you get 4 skulls. Every skull hides a certain instant win that players can get.

If we did our math right, punters can pocket up to 1,000 times the bet in a single spin, which is not bad, especially if you set the bet to the max. The Wild is the symbol that pays the most, offering 50 times the bet for five of a kind. Next in line is the King, offering 25 times the bet for the maximum combo. Fill all the cells with Wilds and you will get the max payout.

We have mentioned more than once that the jungles of Central and South America can be very dangerous and if you are not prepared for a dangerous adventure, you better stay at home and play the Booming Games product on your desktops. The 2019 release can also be played on handheld devices.

We can all agree that there are more than enough video slot covering a similar topic. Also, the special features incorporated, even though quite rewarding, have already been seen I other Booming Games titles. So, not a lot of originality in the 2019 release. On the other hand, the visuals are quite good, as well as the soundtrack and you can really win big in Aztec Palace, so if you are in to Aztec civilization, you could try out the game, just for the kick of it.