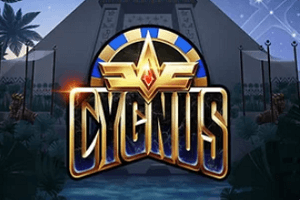 Cygnus constellation, or the Swan constellation, is very important in many cultures of the world. It had a great influence on ancient Egyptians, for example, because it was proved that the constellation matches the position of the three pyramids in Giza. ELK Studios decided to dedicate their latest release to this phenomenon and developed Cygnus, a six-reel video slot that offers from 4,096 to amazing 262,144 ways to win. Visually impressive, the 2019 release offers the Avalanche feature, multipliers up to 64x, and the Free Drops feature, where players get 7 free drops played across 8 rows. Gamers can enjoy the ELK Studios product for a starting price of £0.20 per spin.

The reels are set in front of the largest pyramid in Giza and the Cygnus constellation can be seen in the upper right corner of the screen, so you will have the help of stars and mystical deities as you spin the reels. Low-value icons are represented by Rubies, Emeralds, and Sapphires, while Storks, Camels, and Cats, which are the guardians of the underworld, are used for high-paying ones. What is a bit awkward is that the Lucky Seven is used as the regular symbol that pays the most. The Wild will substitute for all regular symbols, while the Scatter triggers the Free Drops feature. Finally, we have the Multiplier icon, which increases the win multiplier.

The 2019 release is not as common as other standard video slots, because it offers 6 reels and can get you up to 8 rows. The reels do not actually spin, since the symbol drop on the screen. Thanks to the Avalanche feature, the winning icons are removed, making room for new symbols to appear and hopefully make a new winning combo, so multiple wins are possible in a single spin. You start with 4 rows and can go up to 8 rows, and the ELK Studios title benefits from 4,096 to 262,144 ways to win and every spin will cost you 20 coins. The how big the coin value will be depends on you, but remember that you can wager as low as £0.20 and as high as £100 per single spin.

The Free Drops Bonus feature is triggered when the Bonus Scatter reaches the left pillar on the reel grid. Gamers will be rewarded with 7 free drops, but you can get extra freebies during the feature. Free drops are played with all 8 rows and players will benefit from 262, 144 ways to win on each drop.

When talking about the max possible win, you can expect payouts up to 5,000 times the bet both in the base game and the Free Drops feature. Bigger wins are supposed to happen during freebies since the multiplier Scatters are sticky, so the win multiplier can only go up. The Lucky Seven is the highest-paying regular symbol, offering 30 times the bet for six of a kind. Cygnus’ RTP is 96.1%.

Daredevils for all over the world will go down to Giza and test their luck with Cygnus, but if you are not prepared to go that far, you can always play the ELK Studios product from your homes or on the go, because the 2019 release is playable across all devices and offers the same gaming experience on any compatible gadget.

We believe that there are more than enough video slots themed after ancient Egypt, but somehow we feel that Cygnus will have no problem standing out from the crowd, thanks to outstanding graphics, a fitting soundtrack and rewarding additional features. The Avalanche feature can get you up to 8 rows and up to 262,144 ways to win in the base game and the Free Drops feature, while win multiplier goes up to 64x, but do not expect to boost the multiplier to the max every time. Action junkies would have liked that more features are to be found in the 2019 release. Even so, you should definitely try out the ELK Studios product.