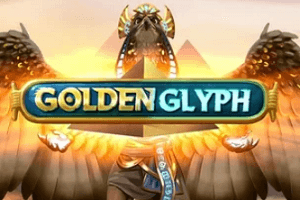 Quickspin decided to treat us with an action-packed video slot, called Golden Glyph. The theme of the game is well known, but the features incorporated are simply amazing and will help you land wins up to 13,185 times the bet per single spin. The 2019 release features seven reels, seven rows and benefits from cluster pays. Thanks to tumbling reels, the winning symbols will be removed, creating room for new icons to appear and creating a Power Wild, which can activate Power-Ups if part of a winning cluster. Four Power-Ups can be expected, one of them being the Free Spins Bonus, with Golden Glyph Wilds that carry an increasing multiplier.

The reels are set in an ancient Egyptian town, with lots of pyramids on the horizon. Symbols on the reels include some familiar characters that can be found in plenty of other video slots with a similar topic. Horus is leading the group, being the highest-paying regular icon, followed by Cleopatra and Tutankhamun. Four tiles with Snakes, Ankhs, Eyes and Water act as low-value symbols. The regular Wild will appear and substitute for all regular symbols. The Power Wild will also trigger Power-Ups, while the Golden Glyph Wild appears only in free spins and comes with an increasing multiplier.

The rules of the game are not as complicated as it may seem in the very beginning, but it will take you a few spins to fully understand how everything functions. The Quickspin title features seven reels, seven rows and offers cluster pays, meaning that you need to land a cluster of 5 or more matching symbols to get a win. Tumbling reels will remove winning symbols and make room for new ones to appear. Betting is fixed at 20 coins per spin, while the coin denomination can be altered and players can wager as low as £0.20 and as high as £100 per single spin.

Once a Power Wild appears, if it becomes a part of the winning combo, it will activate the Power-Up that is displayed on the circle on the left side of the screen. Multiple wins are possible in a single spin, meaning that multiple Power-Ups can be triggered at the same time, but will act one at a time. Blaze of Fire will land on a certain position and destroy all symbols in the same reel and row, paying for every icon destroyed. Eye of Horus will randomly pick a low-paying symbol and remove all instances from the reels, paying its value. The Golden Scarab will add 4 – 10 Wilds on random positions. The Free Spins Bonus will get you 9 Free Spins with a Golden Glyph Wild.

When free spins start, the Golden Glyph Wild will be added on the reels and will move on random positions during the feature. When part of a winning combo, the Golden Glyph Wild will increase the win multiplier by 1x, up to 99x possible. The Power Wild and Power-Ups are also active during freebies, so you can get all the extras as in the base game, only when you trigger the Free Spins Bonus, you get 3 extra free spins.

A total of 13,185 times the bet can be won in a single spin, mostly thanks to the Golden Glyph Wild, which can carry a multiplier up to 99x. Horus is the symbol that pays the most, offering 250 times the bet for the maximum combination. The Power-Ups will come in handy when you land successive wins. Golden Glyph’s RTP is 96.19%.

Despite the fact that the Quickspin title is packed with details, the 2019 release houses amazing graphics and the game quality is simply excellent, meaning that players will have the same gaming experience on both desktop and handheld gadgets.

– Not easy to boost the multiplier to the max

We did not like the fact that this is one more video slot themed after ancient Egypt, but once we started spinning the reels, we were so occupied with Power Wilds, Power-Ups and the Free Spins feature with Golden Glyph Wild, which comes with an increasing multiplier, up to 99x. Tumbling reels and Power Wilds will help you unlock Power-Ups and boost your wins, especially during freebies. As for the overall visual appearance, we were more than satisfied with the graphics, while the soundtrack is simply awesome. Punters should definitely try the Golden Glyph video slot this winter.