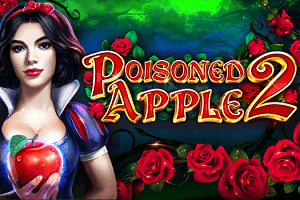 A brand-new adventure is waiting for Snow White and her Prince Charm. This time, they will try to defeat the Cruel Queen with the little help of the Dwarves and the Hunter. Her Poisoned Apples will appear on reels 1, 3, and 5, but that is a good thing because you can use them to trigger the Free Spins feature. Poisoned Apple 2 is a five-reel, four-row video slot that benefits from 20 fixed paylines and offers the maximum payout of 1,200 times the bet. Look for the fallen Wild on the central reel to trigger the Mirror Wild feature both during the base game and the Free Spins feature.

Just like in the famous Booongo original, there are some familiar characters appearing on the reels of the 2019 release. Snow White is the highest-paying regular symbol, and she is accompanied by her Prince Charm. The Cruel Queen will try to attack her stepdaughter, and we are yet to see whether the Hunter will join her, or will stay true to the Princess. We all know that the Dwarves will do anything to protect their beloved Snow White. The Mirror is the Wild that substitutes for all regular symbols and also triggers the Mirror Wild feature, while the Poisoned Apples are used as Scatters that trigger free spins.

Unlike in Poisoned Apple, the sequel offers a bit different reel grid, since the 2019 release features 5 reels and four rows while offering 20 fixed paylines, which pay left to right, starting from the leftmost reel, with three of a kind being the minimum for landing payouts. You will need 20 coins to spin the reels, but gamers can alter the coin denomination, which goes from £0.01 to £3. Punters can bet as low as £0.20 and as high as £60 per single spin. To speed the reels up, click on the Lightning on the right side of the reels. Click on Autoplay to start automatic spins.

First, we need to mention the Mirror Wild feature, triggered every time a Mirror Wild appears on the central reel. Land a Wild on reel 3 and, if there are more wilds on reels 1, 2, 4, or 5, the Wilds in question are mirrored from reels 1, 2 to reels 4, and 5 and vice versa. The Mirror Wild feature is active both during the base game and the Free Spins feature.

Land three Poisoned Apple Scatters on reels 1, 3, and 5 and you will trigger the Free Spins feature. Spin the Wheel of Fortune to determine how many freebies you get (up to 10 possible). Now, once free spins start, the Progressive multiplier is active, starting from 1x and increasing by 1x after each freebie. The win multiplier can go up to 10x.

The maximum possible payout is lower than in the original. Poisoned Apple 2 offers a max payout of 1,200 times the bet per single spin. Trigger the Free Spins feature and boost the Progressive Multiplier to win big. The Wild is the symbol that pays the most, offering 20 times the bet for five of a kind.

Just like its famous predecessor, the 2019 release is fully optimized for all devices. The reels are set in front of Dwarves’ House in the middle of the woods, but you can visit Snow White from your homes or on the go. The graphics in the Booongo product are much better than in the original, securing smooth gameplay on all devices.

+ Free Spins with a Progressive Multiplier

In our humble opinion, the original Poisoned Apple video slot is slightly better than the 2019 release. The sequel boasts better visuals, but fewer special features. On the other hand, triggering freebies is much easier now, with three Poisoned Apple Scatters appearing on reels 1, 3, and 5, and especially due to the fact that you can buy the feature. The Progressive Multiplier really comes in handy in the last few freebies, because it gets rather big. Also, the Mirror Wild feature will help you land wins more easily in both the base game and the Free Spins feature.