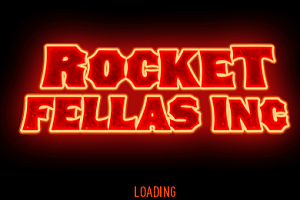 Rocket Fellas Inc is the latest release coming from Thunderkick’s creative kitchen. Visually impressive, the 2018 release is placed in a mine, where four Rocket Fellas are digging for minerals and precious gemstones and they might remind you of dwarfs, which they probably are. Playable from £0.10 per spin, Rocket fellas Inc features five reels, four rows and benefits from 30 fixed paylines. There are several special features incorporated, including the Rocket feature, Sticky Wilds, Hot Reels and the Free Spins feature, where gamers may trigger up to 20 freebies all at once. Put your mining equipment on and start digging for riches!

There are four Rocket Fellas in this crew. The Red one is in charge of bombs and he recently lost an eye because of an explosion. The Yellow dwarf carries dynamite, the Green one works with shovels, while the Blue dwarf carries pickaxes. They are looking for gemstones and minerals, so it is no wonder that Rubies, Diamonds, Emeralds and Citrines can be found among low-value symbols. The Wild acts as a substitute for all regulars symbols, while the Fist is the Scatter that triggers free spins. A Rocket appears on reel 1 and adds Wilds on reels. A Barrel can explode and also add Wilds on reels. 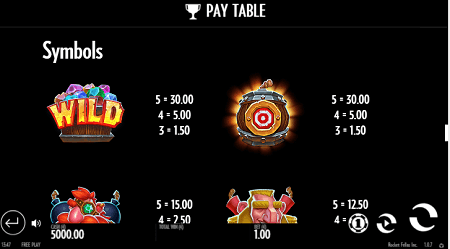 The reels are set deep into the mine and there will be lots of explosions as you play the game, because of the excavations. As for the rules of the game, they are not as dangerous as bombs and dynamite, but you should be careful when playing the 2018 release, just to keep everybody safe. The Thunderkick product is a five-reel, four-row video slot that benefits from 30 fixed paylines. Land at least three matching symbols on a payline, on successive reels, starting from the leftmost reel, and you will start winning payouts. Spinners can bet as low as £0.10 and as high as £100 per spin.

Thanks to the Rocket feature, a Rocket will land on reel 1 every now and then. The position on which the Rocket lands will turn Wild as the Rocket flies away. Also, Barrels will land on other reels. If it happens that a Rocket and a Barrel land on a same row, the Rocket will hit the Barrel and turn it into a Wild. All other Barrels that are located on the same reel will also turn Wild.

The Free Spins feature is triggered when three or more Scatters appear on the reels. Gamers may trigger 10, 15 or 20 freebies, depending on the number of Scatters landed. During the Free Spins feature, extra freebies can be triggered (3, 10, 15, 20), again, depending on the number of Scatters landed. During free spins, the Rocket feature is active and when a Rocket hits a Barrel, it becomes a sticky Wild that remains locked on its position until the feature ends. All Barrels that land on the same reel as the Sticky Wild will be turned into Wilds for that particular free spins. This is called the Hot Reels feature.

The Thunderkick product is one of those video slots that gamers can take with themselves anywhere they want and play it any time they like. The 2018 release is fully compatible for all mobile devices, just like many of other Thunderkick titles. The Rocket Fellas Inc video slot will run as smoothly as possible on any compatible handheld gadget.

– Not easy to trigger all 20 free spins

– It can get a bit loud in the mine

This is not the first video slot themed after dwarfs and mining that we have tested, but we can say that it is one of the good ones. The 2018 release houses crisp, cartoonish graphics and an engaging soundtrack that will get you in the right mood in no time at all. The Rocket feature leaves plenty of Rockets on reel 1 often, so there will be lots of Wilds you can use, especially when the Rocket hits a Barrel. The Free Spins feature is also fun and rewarding, mostly because of sticky Wilds and Hot Reels and this is where players can expect massive wins. Even though mines can be very scary places, we think that punters will enjoy their stay with Rocket Fellas Inc.