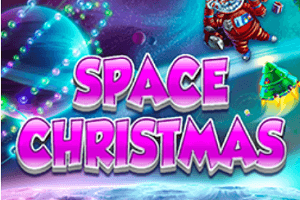 Santa has delivered all the presents to the kids on Earth, so he decided to go up in space and surprise all the extra-terrestrials out there with cosmic gifts. Space Christmas is 1×2 Gaming’s 5-reel, 20-payline video slot that is taking us to the endless cosmos, where we will be looking for strange planets, robotic Christmas Trees, and Santa’s Space Sleighs, to trigger up to 18 freebies and get up to 5 Pick Me Bonus prizes. Playable from £0.20 per spin, the 2019 release boasts crisp graphics and a strange soundtrack that is far from jolly.

The reels of the 1×2 Gaming title are set in outer space and all the symbols that appear on the screen are theme-related. We do not know what aliens wanted for Christmas, but we can see some strange gifts Santa has prepared for them. Santa himself is wearing a red spacesuit, as well as his faithful Reindeer. We are still to discover whether the Snowman is made from snow or from metal. A strangle Planet will also appear, and we are to see which type of Candy aliens eat. Four types of Crystals are used as low-paying symbols. The Tree is the Scatter that triggers the Free Spins feature, while Santa’s Sleigh is used as the Pick Me Bonus Scatter. Finally, the Star is the Wild that substitutes for all regular icons.

The rules of the game are quite similar to those we have here on Earth. The 2019 release features five reels, three rows and benefits from 20 fixed paylines, which pay left to right, starting from the leftmost reel, with three of a kind being the minimum for landing payouts. Betting is fixed at 20 coins per spin, but the coin denomination can be altered, so players can wager from £0.20 to £50 per single spin. Such a wide betting range will certainly draw the attention of both penny punters and high rollers.

Look for the metal Christmas Trees, since they are used as Scatters that trigger the Free Spins feature. Land three, four or five of them to trigger 10, 14, or 18 free spins. During the feature, all Wilds that appear on the reels will remain locked on their position until freebies are over. The bad side of the story is that the feature cannot be retriggered.

Santa’s Sleighs will also land on the reels, so try to land 3, 4, or 5 of them to trigger the Pick Me Bonus. Depending on the number of Sleighs landed, gamers can get up to 5 picks in the Bonus stage and pocket instant prizes.

The top payout of the 1×2 Gaming title is set at 16,000 coins. Santa is the highest-paying regular symbol, offering 800 coins for five of a kind. Fill all the cells with Santa and the top payout is yours. Use the Sticky Wilds in the Free Spins feature to land big wins. Snowman will get you 500 coins for the maximum combo. Space Christmas’ RTP is 96%.

Space is definitely the new final frontier, but not all of us will have the opportunity to follow Santa to cosmos. Even so, you can watch him from your homes or on the go, since the 2019 release is playable across all devices. The quality of the game is completely the same on any compatible gadget.

+ Up to 18 freebies with Sticky Wilds

+ Instant prizes in Pick Me Bonus

First of all, we have to say that we were a bit surprised with the soundtrack used in the 1×2 Gaming product, but maybe that’s what aliens listen during Christmas. Even so, we expected something a bit jollier. As for the visuals, they are quite good. The special features incorporated can help gamers land big wins. The Free Spins feature comes with Sticky Wilds, while you can get up to five picks in the Pick Me Bonus. We did not like the fact that freebies cannot be retriggered. If you want to follow Santa into outer space, then the 2019 release is a perfect game for you.