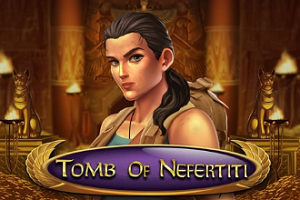 One of the most famous Egyptian queens, Nefertiti, has just got another video slot themed after her. Tomb of Nefertiti is a five-reel, 3-row video slot that offers 20 paylines in the base game and 40 paylines in the Raider Spins feature. Visually impressive, the Nolimit City title offers plenty of features for a reasonable starting price of £0.20 per spin. Wild Raider is randomly triggered and adds Wilds on the central reels. Winning combos come with respins and win multipliers up to 3x, thanks to the Win Respins feature. Curse of Nefertiti is another random feature that syncs the three central reels. Finally, we have the Raider Spins feature, which is played with 40 lines.

It is still a mystery where the queen is buried, and we will have to follow a young Woman, which resembles Lara Croft, the original Tomb Raider. The Woman is on the quest for the lost tomb and is also the Wild that substitutes for all regular symbols and does not appear on reel 1. Nefertiti is the Scatter that triggers Raider Spins. Horus, Anubis and Bastet are the deities that guard the entrance of the tomb, and punters will also notice plenty of Scarabs and Pots, which are used for organs. Low-paying symbols are represented by playing cards.

Like in most other Nolimit City products, the rules of the game are not that complicated. The 2019 release features five reels, three rows and offers 20 fixed paylines, which pay left to right, starting from the leftmost reel. Land at least three matching symbols on a line and you will start winning payouts. During the Raider Spins feature, you will get 20 more paylines to benefit from. Betting is fixed at 20 coins per spin (1 coin per line), but the coin denomination can be changed, so spinners can play the Tomb of Nefertiti video slot from £0.20 to £100 per single spin.

The Wild Raider feature is triggered randomly and will add Wilds on the three central reels. Land a winning combination and you will trigger the Win Respin feature. The reels are locked and the winning symbols respin for a possibility of another win. Also, the win multiplier is increased by 1x. Up to 2 respins can be triggered and the win multiplier can go up to 3x. If the Wild is a part of the winning combo, it is also locked into place. The second random feature is called Curse of Nefertiti and it can be triggered during each spin. All three central reels are synced and will display the same symbols.

In the end, we will mention the Raider Spins feature, triggered by three or more Nefertiti Scatters. Up to 20 freebies can be triggered, depending on the number of Scatters landed. The win multiplier will go up by 1x after every win and there is no limit how big the multiplier gets. The Win Respin feature is also active, as well as the Wild Raider feature. Freebies are played on 40 paylines. For every extra Scatter landed, gamers get 1 extra free spin.

A total of 3,768 times the bet can be won in a single spin. The Raider Spins feature is where you have to look for huge payouts because here the win multiplier has no limits and increases after every win. The Win Respin feature is also quite generous, while the Wild Raider and the Curse of Nefertiti can prove to be extremely helpful. Tomb of Nefertiti’s RTP is 96.19%.

Tomb of Nefertiti on Mobile

We like to say that tombs of ancient pharaohs and queens can be extremely dangerous and players will have to keep their eyes open for the entire time they spend in the depths of a pyramid. Nolimit City developed a video slot that can be played across all devices, so you do not have to go underground to explore the Tomb of Nefertiti.

+ An exciting and rewarding video slot

We can all agree that there are more than enough video slots covering a similar topic and that we have visited ancient Egypt quite often in the past, but we believe that Tomb of Nefertiti has what it takes to become a popular game. First of all, the visuals are excellent, as well as the soundtrack. Second, we have plenty of additional features that will keep players busy and will also help them land huge wins, especially the Raider Spins feature, where the win multiplier only goes up. Honestly, the 2019 release is definitely worth your attention, if you are an action junkie.