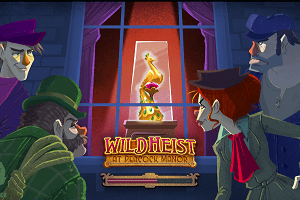 Get your sneakers on and keep the crowbar and the lantern close, because you are about to join four Burglar Masterminds in a heist of a lifetime. Collect all Key Scatters to enter the Peacock Manor and help the Masterminds steal the valuable Peacock Statue and they will reward you generously for your assistance, up to 8,500 times the bet in a single spin! Wild Heist at Peacock Manor is a five-reel, seventeen-payline video slot from Thunderkick that offers random Mystery Features in the base game, Wild reels, Random Wilds, Walking Wilds, as well as the Bonus game with free spins and lots of upgrades.

The four Burglar Masterminds have already created a sneaky plan to enter the Peacock Manor and perform the heist. You will be joining these criminals in this dangerous adventure, so you should meet the members of your crew. The rugged burglar is leading the group and is followed by a red-haired woman, a smiling chap with a cigarette in his mouth and a red-nose elderly man with a green hat. The golden Peacock Statue is the highest-paying regular symbol and is three cells high. There is also the Wild that substitutes for all symbols bar the Key Scatter, which triggers the Bonus game. Playing cards are used for low-value symbols. 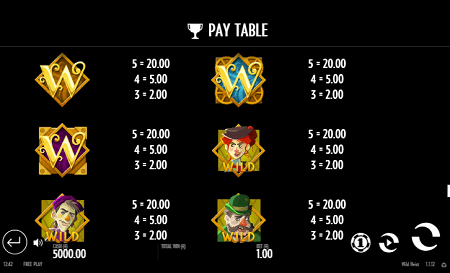 You don’t have to be a mastermind in order to understand the rules of the game. Thunderkick kept it very simple when talking about gameplay, so that even a mere beginner will be playing like a pro in no time at all. The 2018 release features five reels, three rows and offers 17 fixed paylines. Each spin requires 20 coins, but the coin denomination can be altered, so you can bet as low as £0.10 and as high as £100 per spin. The slot pays left to right, starting from the far left reel and three of a kind is the minimum for landing payouts.

There are three random Mystery features that can be triggered during base game. The Wild Reel feature will turn up to three reels into Wild ones. In Random Wilds feature up to 7 random Wilds will be added to the reels. Walking Wilds feature will get you Wilds that will walk one position to the left on each spin. Respins are added as long as one Walking Wild is present on the reels.

Land at least three Key Scatters to unlock the door of the Manor and start the Bonus game. You will start with seven freebies and the Pick screen. Depending on the number of Scatters landed (3, 4 or 5), you will get to pick 3, 4 or 5 cards from the table. Cards include additional freebies, multipliers applied on each win, one of Mystery features and additional Wilds. Some of the Burglar Masterminds can be turned into Wilds. You can get extra picks to boost your free spins by landing two or more Key Scatters during the feature. Gamers can get up to 4 additional picks during free spins. 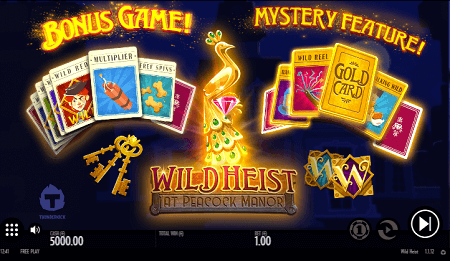 Even though the 2018 release seems as an old-school burglary, the Thunderkick product is extremely up-to-date when it comes to technology used by the burglars. Spinners can try and enter the Peacock Manor from their desktops, laptops and other compatible handheld gadgets, which will certainly please mobile gamers, who prefer performing their heists from a safe distance.

– It takes time to obtain all the necessary Keys

Wild Heist at Peacock Manor is an excellent crime story that offers fun, excitement and plenty of rewarding features. All cat burglars among spinners will definitely enjoy the 2018 release, since there is a veil of mystery surrounding the game, and the grand prize for a successful operation is rather good, up to 8,500 times the stake in a single spin. Try to collect as many Keys as you can in order to boost your freebies to the max and secure big wins in each of them.