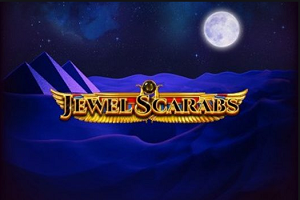 It seems that ancient Egypt is an inexhaustible source of themes for video slots. The latest is coming from Red Tiger Gaming’s creative kitchen and it is called Jewel Scarabs. Set in front of the famous pyramids, the 2020 release features five reels, three rows and offers 9 fixed paylines. The central attraction of the game is the Golden Scarab, which acts both as a Roaming Wild and a Scatter that triggers the Golden Spins feature. The Roaming Wild will substitute for all icons and move around the reels for each spin as long as there are successive winning combos. In the Free Spins feature, Wilds come with increasing multipliers.

Those of you who had the pleasure of playing video slots with a similar topic will recognize all the symbols that populate the reels. The game is set in a desert, overlooking the three pyramids and with some camels passing by in the background. As we have already said, the Scarab is the most important icon, acting both as Wild and a Scatter, and also being the highest-paying symbol, alongside Anubis. Bastet is also there, as well as the Hawk, the Eye of Ra, and 10-A playing cards, which act as low-value symbols.

Even though we all know that pyramids are usually packed with booby-traps, simply to keep the imposters away, you do not need to worry about your safety in the 2019 release, since the rules are as easy as possible. The Red Tiger Gaming title features five reels, three rows and benefits from 9 fixed paylines, which pay left to right, starting from the far-left reel. Land at least three matching symbols on a line to start winning payouts. The betting range is not that wide since you can wager as low as £0.20 and as high as £10 per single spin.

Three of them will trigger the Golden Spins feature, which is actually the Free Spins feature. Here, the triggering Scarabs remain on the reels for the duration of the feature, but every time you land a winning combo, they will change their position. Also, every time a Wild is included in the winning combo, the Wild multiplier will increase by 1x and there are no limits how big the multiplier can get.

Like in most other Red Tiger Gaming titles, the 2020 release offers a maximum possible payout of 5,000 times the bet per single spin. The symbols that pay the most are the Scarab Wild and Anubis, both offering 180 coins for five of a kind. Trigger the Golden Spins feature for bigger wins, thanks to increasing multiplier Wilds. Jewel Scarabs’ RTP is 95.77%.

Spinners can enjoy the Red Tiger Gaming product across all devices. If you want, you can visit the pyramids from the comforts of your homes, or on the go, playing the 2020 release on your laptops, desktops, mobile phones, tablets and other compatible handheld gadgets.

– Could use a bit more action

Another Egyptian-themed video slot featuring ancient deities and Scarabs with features we have already seen in other video slots. Ancient Egypt is definitely one of the most popular themes in the iGaming industry, but, to be completely honest, we have had enough. On the other hand, the visuals are excellent, and the soundtrack fits the theme perfectly. We love the fact that the Wilds stick around on winning spins and that the Wilds come with increasing multipliers on the Golden Spins feature. If you enjoy video slots with a similar topic, you should certainly try out the 2020 release.