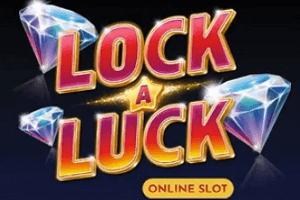 Fans of old-school slot machines will be pleased to know that Microgaming recently released a new video slot, called Lock a Luck, in cooperation with All 41 Studios. Playable from £0.20 per spin, the 2019 release offers no complicated additional features, except the Locked Reels feature, which syncs 2 or more adjacent reels to display identical symbols. If all five of them are synced, you can expect huge wins. With simple, but crisp graphics and a soundtrack found in plenty of land-based slot machines, you will really have the impression that you are sitting in a casino, sipping cocktails and playing a real one-armed bandit.

The shiny blue background is what you will see behind the reels, while the symbols are extremely familiar and can be found in most of the games with a similar topic. Look for the Diamond, since that is the highest-paying icon of the Microgaming product. Also, there will be plenty of Lucky Sevens, Horseshoes, Clovers and Cherries to be collected. Five playing cards are used for low-value symbols. The red Wild will substitute for all other icons, simply to help gamers land winning combinations more easily. Since there are no special features, there are no Scatters on the offer.

Due to the fact that we are talking about a simple slot machine, the rules of the game are also far from complicated. The 2019 release features five reels, three rows and benefits from 243 ways to win. Land at least three matching symbols on successive reels, starting from the far left reel, and you will begin winning payouts, it’s as simple as that. Betting is fixed at 20 coins per spin, but the coin value can be altered, so players can wafer as low as £0.20 and as high as £60 per single spin. The control panel is located under the reels and offers all the usual options.

This is where we need to tell action junkies that they can leave because there are no additional features on the offer, so no free spins, no other bonus games, except for the Locked Reels feature, which is active on every spin. Once you start spinning the reels, two or more adjacent reels will become locked and display the same symbols. Up to 5 reels can be synced at once, which would result in generous payouts. Also, it is important to say that the Wild symbol appears only on reels 2, 3, and 4.

If our sources are correct, up to £80,000 can be won in a single spin, which is quite nice for a classic slot machine. The Diamond is the symbol that pays the most, offering 50 times the bet for five of a kind. Fill all the cells with Diamonds and you are in for a real treat. The Lucky Seven offers 20 times the bet for the maximum combo. Lock a Luck’s RTP is 96.37%.

Lock a Luck on Mobile

Despite the fact that we are talking about a classic slot machine in its essence, the Microgaming title can be played across all devices, so you don’t have to go to a land-based casino in order to pay the game, you can do it from the comforts of your homes, or on the go, whichever way you prefer the most.

+ Up to 5 reels can display identical symbols for huge wins

As you all probably know, we are action junkies and we love when a game offers plenty of additional features, which is not the case with the Lock a Luck video slot. The only special feature on the offer is the Locked Reels feature that is active during each spin, but that will not satisfy the appetites of punters looking for action and excitement. If you are a fan of classic slot machines, then the 2019 release is a perfect game for you, but if not, we would like to tell you that you should look for fun elsewhere.