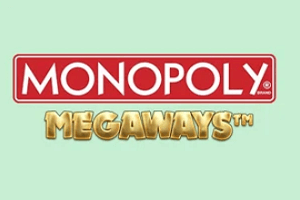 If you are a fan of board games and video slots, you will definitely like the combination coming from Gig Time Gaming’s creative kitchen. Monopoly Megaways is a 6-reel game that offers up to 117,649 ways to win, thanks to the Megaways game engine. The Reaction feature will allow you to win more and more in a single spin, while Mr Monopoly will move around the board, winning houses, giving you extras like maximum megaways, higher win multipliers, houses on owned properties, etc. Houses will help you trigger the Free Spins feature, where you can pocket up to 14,700 times the bet in a single spin.

Those of you who had the pleasure of playing the Monopoly board game will certainly recognize the high-paying regular icons, which can be found on the fields as you spin the dice. All pieces are made from gold and there is the Car, the Top Hat, Ship, Dog, and Car, while the M symbol (representing Monopoly) is the Wild that will substitute for all other icons. Of course, playing cards are used for low-paying symbols. There are no Scatters on the offer since you need to collect houses on the fields to trigger the feature. Mr Monopoly will be there to keep you company and move across the board every time you land a win.

If you want to fully understand how everything functions around here, you will have to learn a bit of something about the Monopoly board game, since it will help you discover the meaning of collecting train stations, utilities, chance cards, and other extras while you spin the reels. The 2019 release features six reels and offers up to 117,649 ways to win. Up to 7 cells can appear in a single reel, thanks to the Megaways game engine. The Reaction feature removes winning symbols and adds new ones on the reels. Successive wins will increase the win multiplier, which resets after a non-winning spin. Bet as low as £0.20 and as high as £40 per spin.

Thanks to the Reel Adventure mechanics, players can upgrade the game as they spin the reels. While Mr Monopoly moves across the board, he will land on certain fields and give you some extras. Land on GO to get the maximum 117,649 ways to win on the next spin. Collect train stations to get extra freebies once you trigger the feature. Utilities will secure you bigger win multiplier during free spins. Land on a community chest to get properties and add houses on the property. If you land on Chance, you will get a spin with max megaways, a property with 1-4 houses or you will trigger the Free Spins feature.

The other way to trigger freebies is to get 5 houses on a single property. You start with 8 free spins, but every next time you trigger the feature, you get 11 free spins, to begin with. More houses on properties will get you extra freebies, as well as train stations, while utilities increase the starting win multiplier. All the extras from the base game are also active in the Free Spins feature, but there is more, like increasing multipliers every time you land on a property with houses, get free spins with max ways to win, 5 extra freebies, and more. Once the feature s over, you lose all ownership of the train stations, utilities and fields you have landed on that were in your ownership.

The biggest win players can expect is set at 14,700 times the bet in a single spin, but this can only be achieved during free spins. The base game offers a max win of 3,500x the bet, which is also quite nice. Top Hat is the symbol that pays the most, offering 50 coins for five of a kind. Monopoly Megaways’ RTP is 96.39%.

We have never thought about the possibility of playing the famous Monopoly board game on our desktops and mobile devices, but it is now a reality, thanks to the good people of Big Time Gaming. Instead of rolling dice and moving your playing pieces, spin the reels and let Mr monopoly do all the hard work on the board.

– Can seem a bit complicated
– Not all symbols are theme-oriented

We need to be completely honest and say that we are not that big fans of the Monopoly board game, probably because of the fact that we were never very good at it, but we did love the slot version. Big Time Gaming did a tremendous job with Monopoly Megaways, starting from the visuals, the incorporation of the actual board game on the reels, all the way to extra features. Some will say that the 2019 release is a bit complicated, but everything will be clear after several spins.