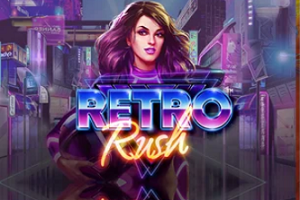 It seems that this peculiar gang is looking to take over the city, and they all ride motorcycles. The oldest among them seems like the member of an important family, judging from his smart looks, but the other four are quite differently dressed. We have a Girl that wears a Sword, a Man with a Gun, and two people wearing bike helmets. Wilds will also appear on the reels, substituting for all symbols except for the Chinese Takeout, which is the Scatter that triggers the Free Spins feature. Wilds come with2x, 3x, and 5x multipliers in the base game. Expanding Wilds that cover entire reels appear only in the Free Spins feature.

The reels of the 2020 release are set on the streets of the city, and you need to act quick because the gang is chasing you with their bikes. The Playtech title features five reels, three rows and offers 30 fixed paylines, which pay left to right, starting from the leftmost reel, with three of a kind being the minimum for landing wins. In the Free Spins feature, three more rows are added and you have 60 lines to benefit from. Every spin will cost you 15 coins, but the coin denomination is changeable, so you can wager as low as £0.15 up to £300 per single spin.

The Sticky Win feature is active both during the base game and the Free Spins feature. Every time you land a winning combination, the winning icons will remain locked on their positions, while other reels perform a free respin. Respins continue until there are no more new winning symbols on the reels, or until you fill all the cells with matching icons, whichever comes first. Wilds appear on the respin, carrying a 2x, 3x, and 5x multipliers.

Land three Chinese Takeout Scatters on reels 2, 3, and 4 to trigger the Free Spins feature. Gamers will get 5 freebies, with the Sticky Win feature active. Symbols tend to land in stacks during the feature, and you get three new rows and 30 extra lines to benefit from. Also, expanding Wilds with 2x, and 3x multipliers appear during freebies.

If we did our math right, players can expect up to 6,000 times the bet in a single spin. Such a win requires lots of high-paying symbols and lots of multiplier Wilds on the reels, so don’t expect to land it quite often. The Elderly gentleman is the symbol that pays the most in the 2020 release. Retro Rush’s RTP is 96.10%.

Due to the fact that the Playtech product is set in future, it is only normal to suppose that the 2020 release is playable across all devices, so you can travel tot eh future from the comforts of your homes or on the go, whichever way you prefer. Note that Retro Rush offers the same gaming experience on any compatible gadget.

We can say with certainty that the 2020 release is far from the best video slot coming from Playtech’s creative kitchen, but it has the potential to meet the demands of players across the globe. It offers two interesting and rewarding features, which can result in huge wins, especially because of the Multiplier Wilds and Expanding Multiplier Wilds. The max payout of 6,000 times the bet is quite tempting, while the betting range will satisfy the appetites of both penny punters and high rollers.

New players only – Maximum bonus is £123 – Max bet with bonus is £5 – No max cash out – Wagering is 50x – Skrill & Neteller excluded – Eligibility is restricted for suspected abuse – Cashback is cash, so no wagering – Cashback applies to deposit where no bonus is included. Full T&C apply
97.0%
Read Review
Play Now
5.

Art of Choosing a Slot Machine: What to Pay Attention to

Picking a slot is a difficult task. Yes, they all technically have reels, and all you’re doing is spinning said…

Roulette players have been trying to beat the wheel since it was invented. Different players use different strategies, methods and…

Best Bets You Can Place in Online Casinos

On our gaming portal, we have already presented the worst bets you can play in online casinos. This time, we…

To help you make the best decision when choosing online slots to play, we bring you yet another list of…