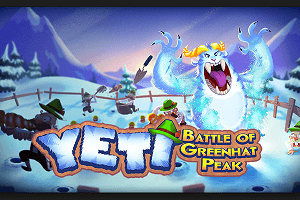 The good people of Thunderkick finally discovered the dwelling place of the Abominable Snowman! Yeti’s cave was found somewhere in Himalayas, in the vicinity of Greenhat Peak. A Mustached Man is the one who discovered the cave, and now Yeti wants to have his revenge. However, Yetis like to eat Golden Carrots, so collect as many of them as you can to help the Mustached Man and trigger the Wild Attack with Frozen Sticky Wilds, or the Free Spins feature, which also offers sticky Wilds and up to 31 freebies. Yeti: Battle of Greenhat Peak is a five-reel slot with 11 fixed paylines, playable from £0.10 per spin.

The moment you start playing the 2018 release, you will meet the two main characters of the slot. Mustached Man is the Wild that substitutes for all regular symbols and can also be a Frozen Sticky Wild, but not in the base game, while the Yeti is the highest-paying regular symbol. The Golden Carrot is the Scatter that triggers both features – Wild Attack and free spins. There is plenty of fruit on the table also, so expect tons of Watermelons, Lemons, Cherries, as well as J-A playing cards, which serve as low-value symbols. 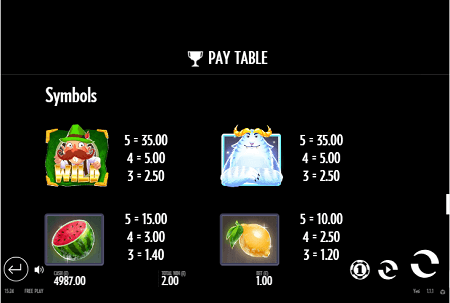 All of you who had the chance to play Thunderkick products will understand the rules of the game in no tie, since they are pretty standard. The 2018 release features the usual 5×3 layout and benefits from 11 fixed paylines, which pay left to right beginning from the far left reel. As you may suppose, three of a kind is the minimum for landing payouts. Ten coins are required for each spin, but, due to the fact that the coin value can be changed, spinners can bet as low as £0.10 and as high as £100 per single spin.

Three, four or five Scatters will get you 10, 15 or 20 freebies. Every additional Scatter landed during the feature will get you one step on the Wild Attack Meter. For every three Golden Carrots on the Meter, you will get one random Frozen Sticky Wild that remains locked on the position until freebies end. You also get 3 extra freebies, while once you fill up the Meter, you will get 5 more freebies. A total of 31 free spin is on the offer, while any non-winning Wild becomes sticky and remains locked until the feature ends. 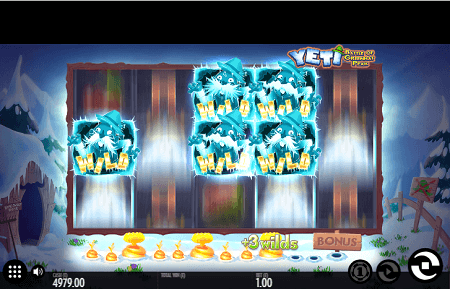 If we did our math right, the maximum possible payout is set at 385 times the bet. Punters can land it if they fill all the cells with Wilds, or Yetis, because these two symbols pay the most, 35 times the bet for five of a kind. Look for Golden Carrots, since they trigger all the features and secure big wins. Yeti: Battle of Greenhat Peak’s RTP is 96.1%.

Himalayas tend to be very cold throughout the year, so you should bring warm jackets, hats and mittens if you decide to pay Yeti a visit. If you stay at home, you can enjoy the 2018 release from the comforts of your homes, or on the go. Thunderkick title is playable across all devices, while the mobile version is available in both landscape and portrait mode.

+ A fun and exciting slot

– Could use a bit more paylines

If you are looking for a perfect combination of fun and excitement, then believe us when we tell you that you’re on the right address! Yeti: Battle of Greenhat Peak is simply awesome, and we are positive you will enjoy spending time with the Yeti and the Mustached Man! The Wild Attack feature is triggered rather easily, so you can count on those Frozen Sticky Wilds on a regular basis. The Free Spins feature is pretty amazing too, with up to 31 freebies and sticky Wilds. All in all, the 2018 release is a great game for the upcoming summer holidays.