Finn and the Swirly Spin Slot is a NetEnt slot launched in 2017. The game houses 5 reels and cluster pays paylines with a 96.62% RTP. This non-progressive slot game also features mobile, scatter symbols, wilds, bonus games, free spins. This game has a jackpot of 50,000 coins and is available for playing on both desktop & mobile.

Welcome to the Emerald Isle, the home of leprechauns! Finn, the magical leprechaun is your host on this journey, so try to make him take you to the end of the rainbow, where he hides his pot of gold. This visually impressive slot uses the Spin Mechanic, where 25 symbols appear independently on a 5×5 grid, and benefits from Cluster Pays.

Your goal is to get the magical Key Scatter to the centre of the grid, so as to unlock the keyhole and trigger one of the features on the offer. Collect Keys and trigger four types of Free Spins feature. Also, gamers will benefit from four random features triggered during the base game. Plenty to play for in the Finn and the Swirly Spin video slot brought to us by the good people of NetEnt. 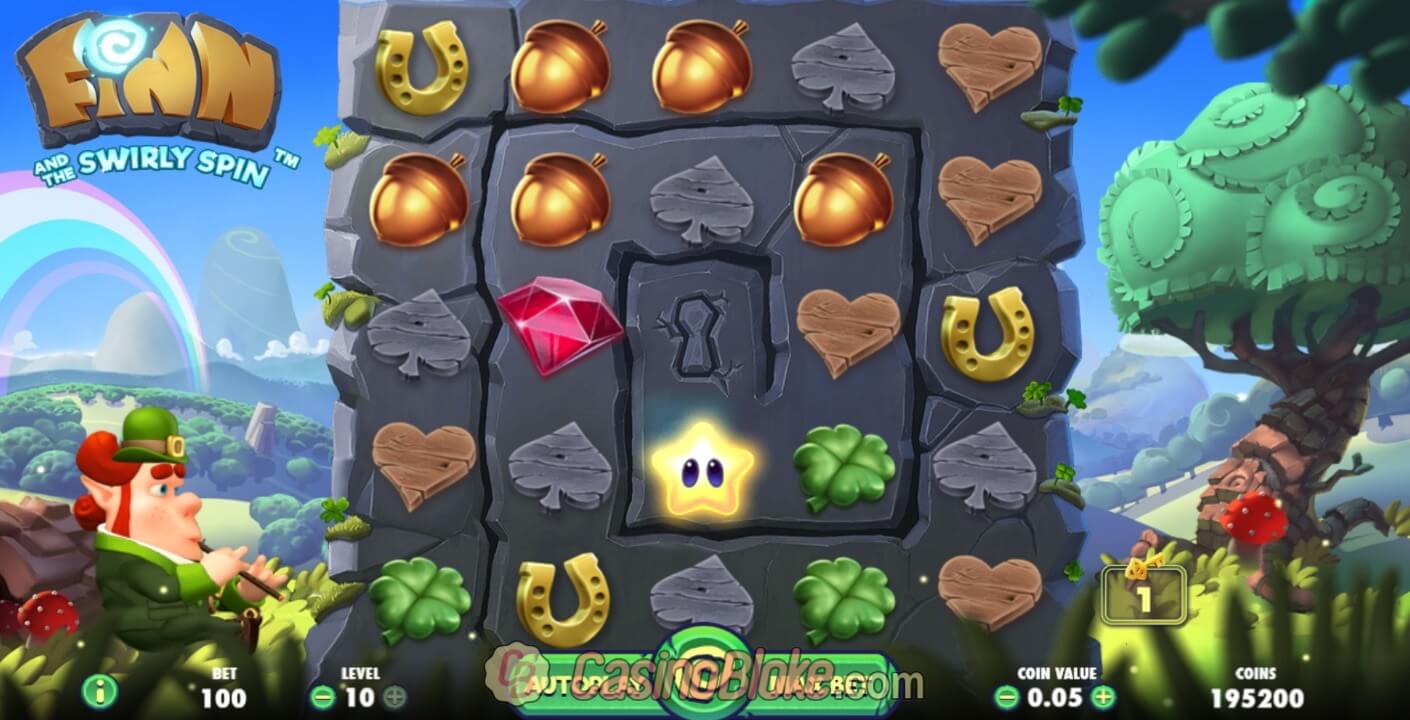 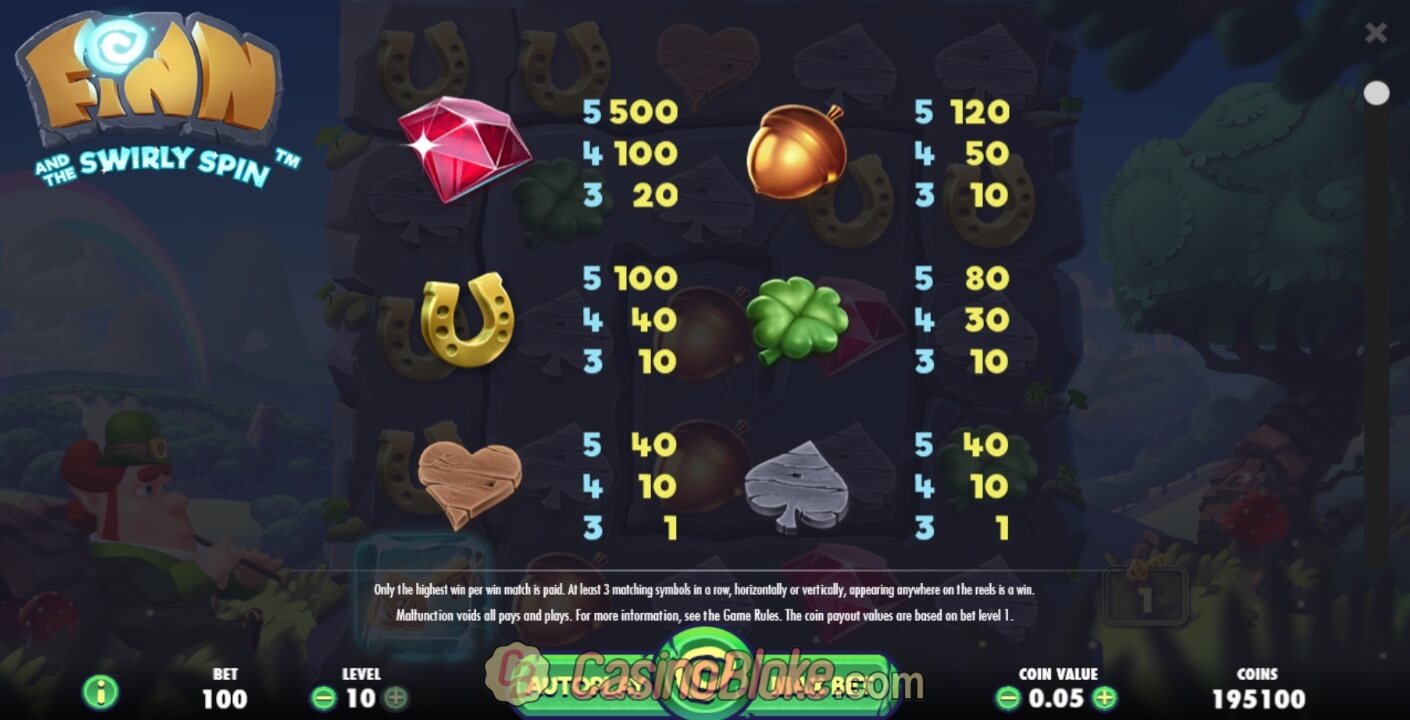 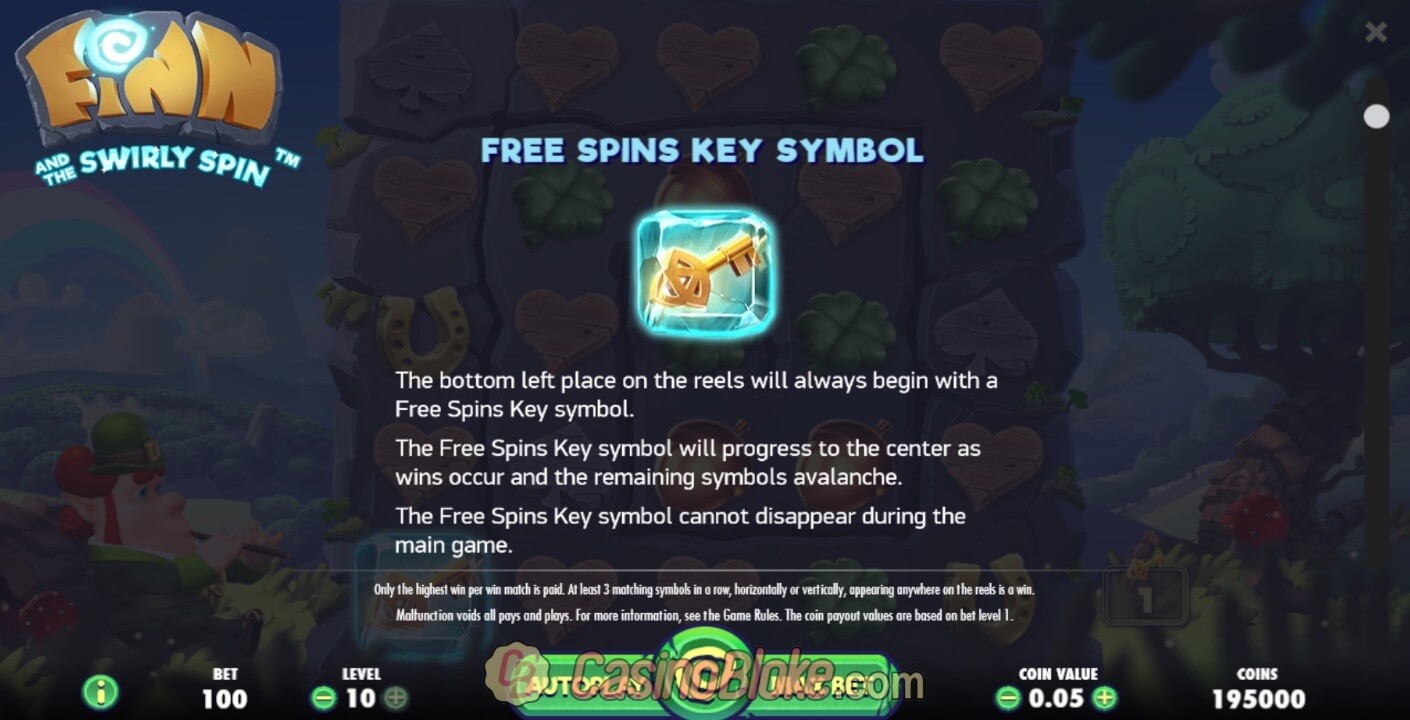 HOW TO PLAY FINN AND THE SWIRLY SPIN

Once you start the 2017 release, you will be taken directly to Ireland, on a beautiful countryside, where Finn the leprechaun is waiting for you, playing his pipe. He is sitting next to a big rock, on which the playing grid is set. Since we are talking about an Emerald Isle-themed video slot, then it is no wonder that NetEnt used some authentic symbols from this area, like Rubies, Golden Acorns, Lucky Horseshoes and four-leaf Clovers.

Also, four card suits are used for low-paying symbols. The Golden Star is used as the Wild and it will substitute for all regular symbols. Also, once a part of the winning combination, the Star will explode and destroy all surrounding symbols, horizontally and vertically. You will notice a keyhole in the middle of the playing grid. This is where you need to get the Key Scatter in order to trigger some of the Free Spins features.

There are plenty of innovations in the 2017 release, so it might take you a while to fully understand how the slot functions. Finn and the Swirly Spin features a standard 5×5 layout, but the symbols appear in a somewhat different manner. The game uses a Spin Mechanic and benefits from Cluster Pays with cascading reels.

What you have in front of yourselves is a column of 25 independent symbols. In each spin, the Key Scatter is the last symbol in the column. Now, in order to form a winning combination, you need to land at least three matching symbols on adjacent positions, either horizontally or vertically.

Once the winning combo is formed, the winning symbols will disappear, making room for new symbols to appear, and also moving the Key Scatter closer to the centre of the playing grid. This is called the Avalanche since the remaining symbols fall in the vacant cells. Every winning combination will also create a Wild symbol, thus giving you more chances to continue landing successive winning combos.

The NetEnt product is really packed with special features, but it’s not that easy to trigger them. Four random features are available during the base game. The Starfall Wild feature will get you 2-5 Wilds on the reels. Dragon Destroy feature will bring out the Dragon, who will burn a random number of selected symbols, causing an avalanche.

The Irish Luck feature gets you a guaranteed win by adding a horizontal or a vertical line of one type of symbols. In Magic Transform feature, all spade and heart symbols are transformed into higher-paying symbols.

There are four different Free Spins features on the offer, but gamers will not be able to use all of them instantly, because certain features require a certain number of Key Scatters to be collected in order to be unlocked. Collect one key and you will be able to trigger the Star Bar Free Spins feature, with 7 free spins and with 2-5 Wild symbols appearing randomly during each freebie.

Collect four keys and you will be able to trigger the Lava Lair Free Spins feature, where players get three Lava Lair free spins during which a certain number of selected symbols is destroyed, while a Sticky Wild will appear in the place of the Key Scatter. In the Lucky Mug Free Spins, spinners are awarded 4 freebies, and during each free spin, a horizontal or a vertical line of one symbol is added for a guaranteed win. You will need to collect 9 Keys to trigger this feature.

Get sixteen Keys in the Key Meter and you will get the opportunity to trigger the Golden Pot Free Spins feature. Punters will be rewarded with 2 Golden Pot freebies and all hearts and spade symbols will be transformed into higher value symbols.

The Ruby is the symbol that pays the most in the NetEnt product, offering 500 coins for five of a kind. Of course, the win will also be multiplied by the bet level, so you can get up to 5,000 coins for five Rubies. Punters can expect as much as 50,000 coins in a single spin, or up to $100,000 if you the coin denomination is set to the max. Cause as many avalanches as you possibly can in order to get multiple winning combinations. Finn and the Swirly Spin’s RTP is 96.62%.

NetEnt got us used to video slots that boast state-of-the-art graphics and amazing soundtracks and that offer plenty of fun and rewarding features, and Finn and the Swirling Spin is no exception. Four random features and four Free Spins features will definitely keep you occupied for a long period of time.

Even though the Spin Mechanic combined with Cluster Pays will be a bit confusing in the beginning, we are positive that gamers will benefit greatly from such a system. Creating avalanches was never more fun because more successive avalanches secure you more wins and gets you closer to one of the Free Spins features on the offer. 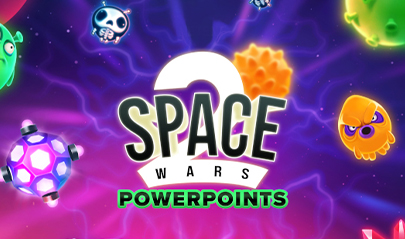 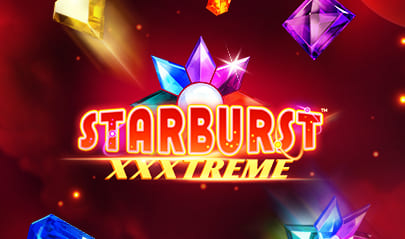 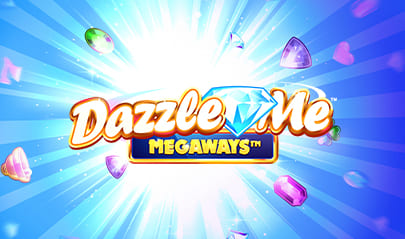 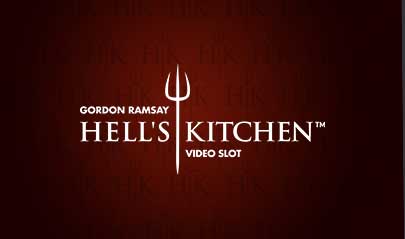 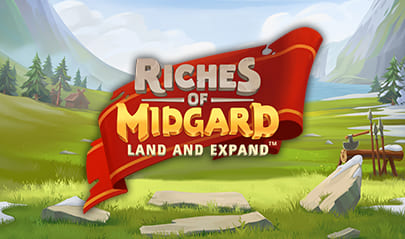 riches of midgard: land and expand 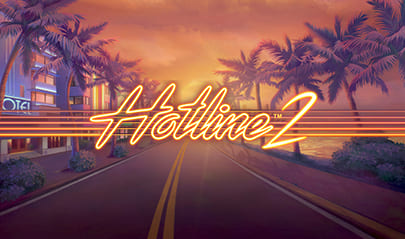 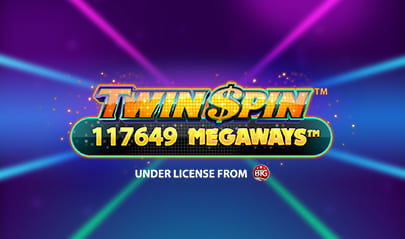 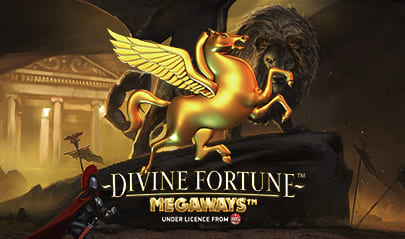