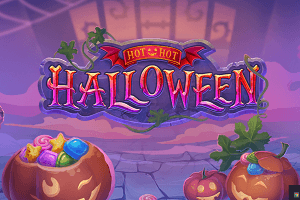 Despite leaving their graves and haunting children on Halloween, the monsters decided to stay home and have a party of their own, with Chests, Ghosts, Eyeballs, severed Hands and plenty of Candy and good music. Hot Hot Halloween is Habanero’s five-reel, five-row video slot that benefits from horizontal pays. Playable from £0.20 per spin, the 2019 release houses some excellent visuals and a creepy but catchy soundtrack, and we are positive that players will have so much fun at this party, especially once they trigger the Free Spins feature, or land winning combos in the central row, where everything is tripled.

We have already mentioned what you can expect to appear on the reels, but we failed to mention that the party is organized in the house next to the cemetery. Do not worry, there will be plenty of light and candles, so you can see everything around you. Please do not pay attention to the sounds of the werewolf. A Devil’s Lucky Seven is the icon that pays the most, followed by the Crate, oozy Eyeball, Blue Ghost, severed green Hand, a Star and plenty of Candy, which represents low-value icons. The Pumpkin is the Wild that substitutes for all symbols on the reels and also has the power to trigger the Free Spins feature.

Before you start wiggling your behinds to the sounds of music, please pay attention to the rules of the game, or you could be thrown out of the party sooner than you think. The 2019 release features a 5×5 reel grid and benefits from horizontal pay, meaning that you need to land matching symbols in the same row and next to each other in order to win payouts. At least three corresponding symbols have to be next to each other horizontally in order for players to win payouts. The betting range is quite wide, going from £0.20 to £5,000, despite the fact that only 20 coins are required for each spin.

Pumpkin Wilds appear on all reels but the central one. Once three or more of them land on the screen at the same time left or right or right to left, the Free Spins feature is triggered and players get 6 freebies. If you manage to land three of them both left to right and right to left at the same time, you get 12 free spins. During the feature, winning symbols are locked and they do not move until the feature is over. Gamers can lock up to 24 icons on the reels.

The Hot Hot feature is triggered randomly and it randomly selects symbols to turn them into double symbols for that particular spin. Only the Devil’s Lucky Seven is tripled and you can land up to 15 of them in a single win.

The biggest possible payout in the 2019 release remains a mystery for us, but believe us when we tell you that you should look for Devil’s Lucky Sevens because they pay the most. Fill all the cells with them, triple them and your winnings will go through the roof, especially because of the fact that all wins on row 2 and 4 are doubled, while wins on row 3 are tripled. Hot Hot Halloween’s RTP is 98.12%.

There are plenty of gamers who like to go on spooky places, but for those of you who prefer not to go on a party on the graveyard, there is the desktop and the mobile version of the Habanero title, both offering the same gaming experience.

Even though Halloween has passed, we think that there will be plenty of gamers who would like to try out the 2019 release, because it offers plenty for a reasonable starting price. The visuals are very good, while the soundtrack is simply excellent. Up to 25 free spins can be triggered at once, but the feature cannot be retriggered. The Hot Hot feature will really help you land more wins, while the multipliers on certain rows will boost your payouts.