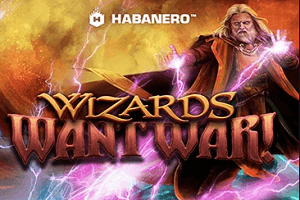 The mystic forces have reached their climax and it is high time for the final battle between good and evil. The White Wizard and the Dark Wizard are about to engage in a fight, and it will be up to you to choose sides in this war. Choose wisely and you can pocket up to 3,600 times the bet in a single spin. Wizards Want War is Habanero’s five-reel, 25-payline video slot that houses crisp graphics and an engaging soundtrack. Playable from £0.25 per spin, the 2019 release offers two special features. The Duel will make the two Wizards fight and get you a Wild combination for bigger wins, while the Free Spins comes with 10 freebies.

As we have already mentioned, the story revolves around the forces of good and evil, represented by the White Wizard and the Dark Wizard. These two are the highest-paying regular icons and also trigger the Duel feature. You will also see a Book of Spells, a Skull and a creature resembling a Dragon. Playing cards are used for low-value symbols. The Wild will substitute for all regular icons and will also pay the most. Two Scatters are needed to trigger the Free Spins feature since both Wizards have their own sources of power that appear on reels 2 and 4.

Gamers are not required to read the Book of Spells in order to learn all there is to know about the Wizards Want War video slot because the rules of the game are not that complicated. The 2019 release features a standard 5×3 reel grid and offers 25 fixed paylines, which pay left to right, beginning from the far-left reel. Land at least three matching symbols on a payline if you want to win a payout, it’s as simple as that. The betting range is quite wide and gamers can wager as low as £0.25 and as high as £5,000 times the bet.

The Duel feature is triggered when the White Wizard lands on reel 1 and the Dark Wizard lands on reel 5 at the same time. Players are required to choose a side and predict a winner of the duel. In the base game, a Wizard needs to strike three times to be the winner, while in the Free Spins feature he has to strike only one time. The Wheel between the Wizards will spin and reveal one of five Wild combinations, which will appear on the reels once the duel is over. If the White Wizard wins the duel, all wins will be doubled, while if the Dark Wizard wins, all wins will be tripled. Once one of the Wizards collects 15 won duels, the following spin will show a Wild combination and will be multiplied by the winning Wizard.

Land two Scatters on reels 2 and 4 to trigger the Free Spins feature and to get 10 freebies. It is possible to retrigger the feature and the Duel feature is also active during freebies. One Duel is guaranteed in free spins and the Wizard you pick will win the battle.

If we did our math right, the biggest possible payout players can expect is set at 3,600 times the bet, but it will not be an easy task. First of all, you need to fill all the cells with Wilds and during a Duel which is won by the Dark Wizard, since he is the one that triples all wins. The Free Spins feature is also where you can expect generous payouts. Wizards Want War’s RTP is 96.59%.

A battle between two powerful Wizards can be very dangerous, especially to people standing on the side, so it is probably the best for you to try out the Habanero product from the safety of your homes, or on the go, from a safe distance. The 2019 release is playable across all devices.

+ Plenty of freebies on the offer

Wizards Want War is an interesting video slot with a popular theme, excellent visuals and a perfect soundtrack that fits the theme perfectly, even though it can seem a bit scary from time to time. The Duel is a very useful feature since it will secure you Wild combinations and win multipliers, both in the base game and the Free Spins feature. Plenty to play for in the 2019 release, but bear in mind that you need to choose your side in this war wisely if you want to pocket up to 3,600 in a single spin.