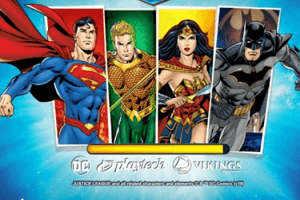 Superman, Aquaman, Wonder Woman and Batman are back on the reels because they are about to face their mortal enemies – The Joker, Darkseid and Cheetah. Justice League Comics is the latest Playtech addition to their Justice League video slots, and it comes with 5 reels, 3 rows and 25 paylines. Packed with special features, the 2019 release offers free games with increasing win multipliers, three Bonus features and four progressive jackpots, which can be won on any paid spin. Playable from £0.05 per spin, the Playtech title boasts colourful graphics and an engaging soundtrack.

DC Comics fans will have no trouble at all recognizing the main characters in the 2019 release. Superman is the strongest member of the Justice League, while his faithful friends and companions are also preparing for the final battle – Aquaman, Batman and Wonder Woman. Their mortal enemies appear as Bonus symbols, and here we can see The Joker, Darkseid and Cheetah. The Wild will substitute for all regular symbols, while the Justice League Logo is the Scatter that triggers the Free Games feature. Low-winning icons are represented by playing cards.

Despite the fact that there are plenty of additional features incorporated, the rules of the game are as simple as possible. The Playtech product features five reels, three rows and offers 25 fixed paylines, which pay left to right, starting from the far-left reel. Once you land three or more matching symbols on a payline, you will start winning payouts, it’s as simple as that. The betting range is quite wide and players can wager from £0.05 to £500 the spin. The control panel is located under the reels and offers all the standard options, like Bet, Info, Autoplay, Turbo mode and Spin.

Once you land three Bonus symbols (The Joker, Darkseid, Cheetah) on reels 1, 2, and 3, you will trigger one of three Bonuses on the offer. The Mystery Symbol Bonus will turn the first three reels into one big reel, displaying a 3×3 Mega symbol, for a guaranteed win. In Moving Wilds Bonus, the first three reels will get a Wild each, and the Wilds will move one step towards left, while other reels respin. Three respins are given, with rising win multipliers – 1x for the first, 2x for the second and 5x for the third respin. In Coin Respin Bonus, Bonus symbols are replaced with either a coin win symbol or a 2x multiplier. They are held in their place, while other reels respin, displaying blank cells or coin wins or 2x multipliers. The feature is over when all the cells are filled, or when there are no new winning symbols appearing on the reels. In the end, all the wins and all the multipliers are combined for the payout.

Land three or more Logo Scatters to trigger 10, 15, or 20 free games, and a 1z or a 2x win multiplier. The number of freebies depends on the number of Scatters landed. Free games are played on a 5×4 reel grid, with 40 fixed paylines. Land two Logos during the feature to get 1, 2, 3, or 5 extra freebies, or land 3 Scatters to get 10 or more free spins and increase the win multiplier by 1x.

The Super Heroes Jackpot is also available, and gamers can trigger it randomly after any spin. Reveal the symbol on the screen to get Mini, Minor, Major or Grand Progressive Jackpot.

With so many features on the offer, there are more than enough opportunities to win big in the 2019 release. First of all, there are four jackpots, with the Grand Progressive Jackpot going from £200,000. Also, during the base game, players can pocket up to 10,000 times the bet, while during freebies it can go up to 16,000 times the bet. The Bonus features are also rewarding.

Fighting against supervillains can be a very dangerous game, so it might be better for you to do the battle from a safe distance. The Playtech title is playable across all devices and you can enjoy the 2019 release on your desktops, tablets, mobile phones, and other compatible handheld gadgets.

– Can seem a bit complicated

If you are fans of action-packed video slots, then Justice League Comics is a perfect game for you. There are plenty of additional features to benefit from, starting from the three Bonus features, through freebies with win multipliers, all the way to four progressive jackpots. Of course, too many features are not everybody’s cup of tea, since the 2019 release can seem a bit complicated in the beginning. Even so, we are certain that the latest Playtech title will be a huge hit.