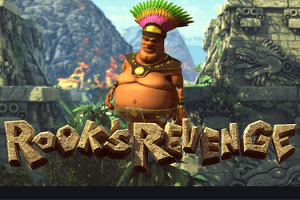 Travel with us to Latin America, where we discovered an ancient Aztec temple, guarded by the mysterious witchdoctor, called Rook. Collect various Aztec symbols to win up to 2,330,000 coins in a single spin. Rook’s Revenge is a five-reel, 25-payline video slot coming from BetSoft’s creative kitchen. Playable from £0.25 per spin, the 2012 release boasts crisp graphics and a fitting soundtrack, while offering Exploding Symbols and Exploding Symbols Multiplier, which can go up to 5x during the base game and up to 25x during the Free Spins feature. Look for the Golden Mask Scatters on reels 1, 2, and 3 to trigger freebies.

The BetSoft product is taking you to the jungles of Latin America and you will meet Rook the moment you start spinning the reels, which are set in front of an ancient temple. Lots of wild creatures will be surrounding you, but do not worry, they are completely harmless. Rook will be by your side while you play the 2012 release. The symbols on the reels include all sorts of Masks from the time of the Aztec civilization. The Golden Mask is used as the Scatter that triggers the Free Spins feature, while the Wild will substitute for all regular symbols on the reels.

Pay close attention, because the rules of the game are not as easy as you may suppose. It is a well-known fact that Aztecs used to leave plenty of booby traps in their temples, to prevent unwanted visitors to enter and steal the riches, so you will ned to know your way around. The 2012 release features five reels, three rows and benefits from 25 fixed paylines, which pay left to right starting from the leftmost reel, with three of a kind being the minimum for landing payouts. Thanks to Exploding Symbols, the winning symbols will disappear, making room for new symbols to land and create successive wins. Betting starts at £0.25 and the biggest wager is set at £125 per spin.

The biggest possible win in the 2012 release is set at mouthwatering 2,330,000 coins. Set the bet to the max and your winnings will go through the roof. The Red Mask is the symbol that pays the most, offering 2,500 coins for five of a kind. Trigger the Free Spins feature and boost the multiplier to the max for hefty payouts. Rook’s Revenge’s RTP is 94.53%.

Even though the BetSoft product was released back in 2012, it is pretty up-to-date when it comes to modern technologies. The Rook’s revenge video slot can be played across all devices, desktop and mobile, and the quality of the game is completely the same on any compatible gadget.

– The Win Multiplier rises with every consecutive win

– Free spins with multipliers up to 15x

Rook’s Revenge is definitely not the best video slot BetSoft has to offer, but it is close enough. The 2012 release boasts exceptional graphics and a soundtrack that will get you in the proper mood the moment you start spinning the reels. The Exploding Symbols feature, combined with the Exploding Symbols Multiplier, will provide more than enough payouts during the base game and especially during the Free Spins feature, since the win multiplier can go up to 15x, if you play your cards right. Also, the maximum payout of 2,330,000 coins is reason enough for you to test your luck with Rook’s Revenge.