Second Strike Slot is a Quickspin slot launched in 2015. The game houses 5 reels and 10 paylines with a 96.26% RTP. This non-progressive slot game also features mobile, wilds, bonus games. This game has a jackpot of 1,000 and is available for playing on both desktop & mobile.

If you are looking for a perfect combination of an old-school fruity and a modern video slot, look no further, because the good people of Quickspin offer you the chance to test your luck with Second Strike, a five-reel, three-row video slot that benefits from 10 fixed paylines and offers only one additional feature.

Visually impressive, the 2015 release is playable from $0.10 per spin. Apart from the reel grid, the Quickspin title also offers a rectangle surrounding the reels, which comes to life every time you land a winning combination and can add up to 10 extra symbols that match the winning symbols to boost the payout, thanks to the Second Strike feature. 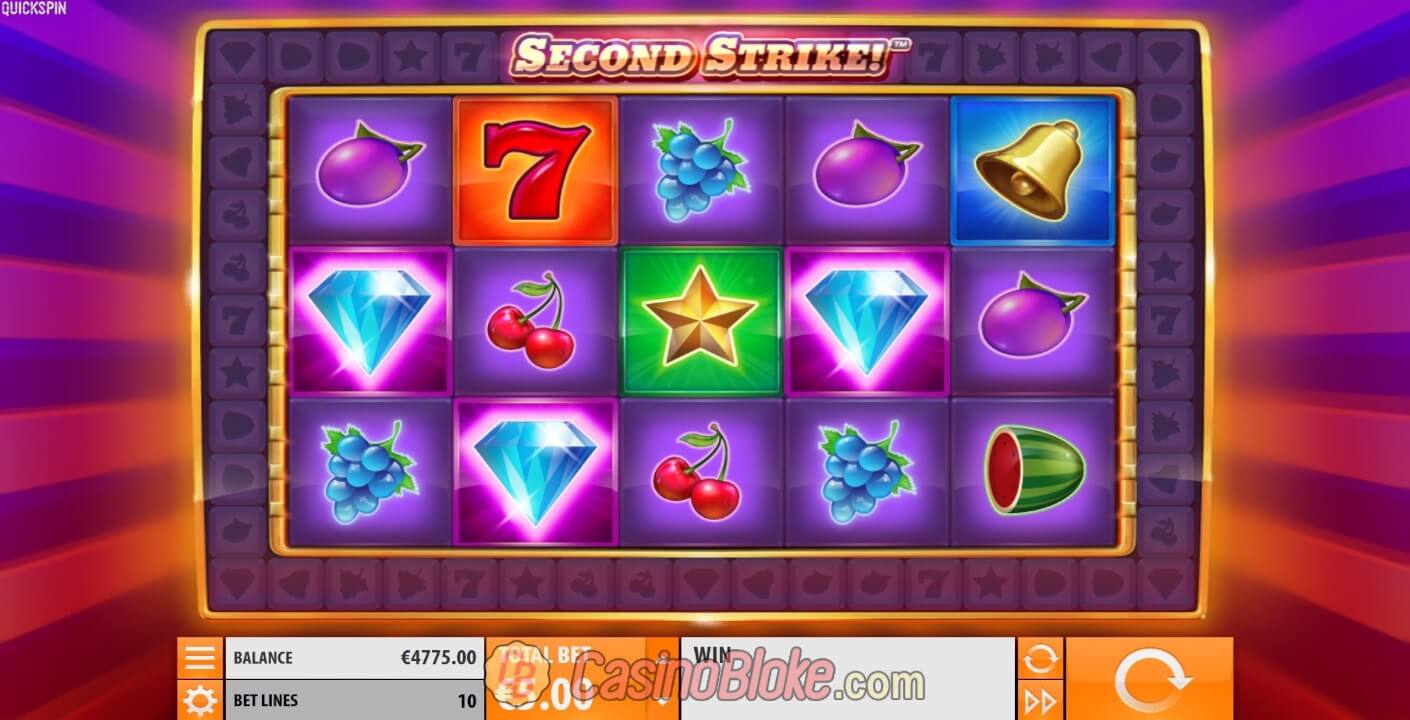 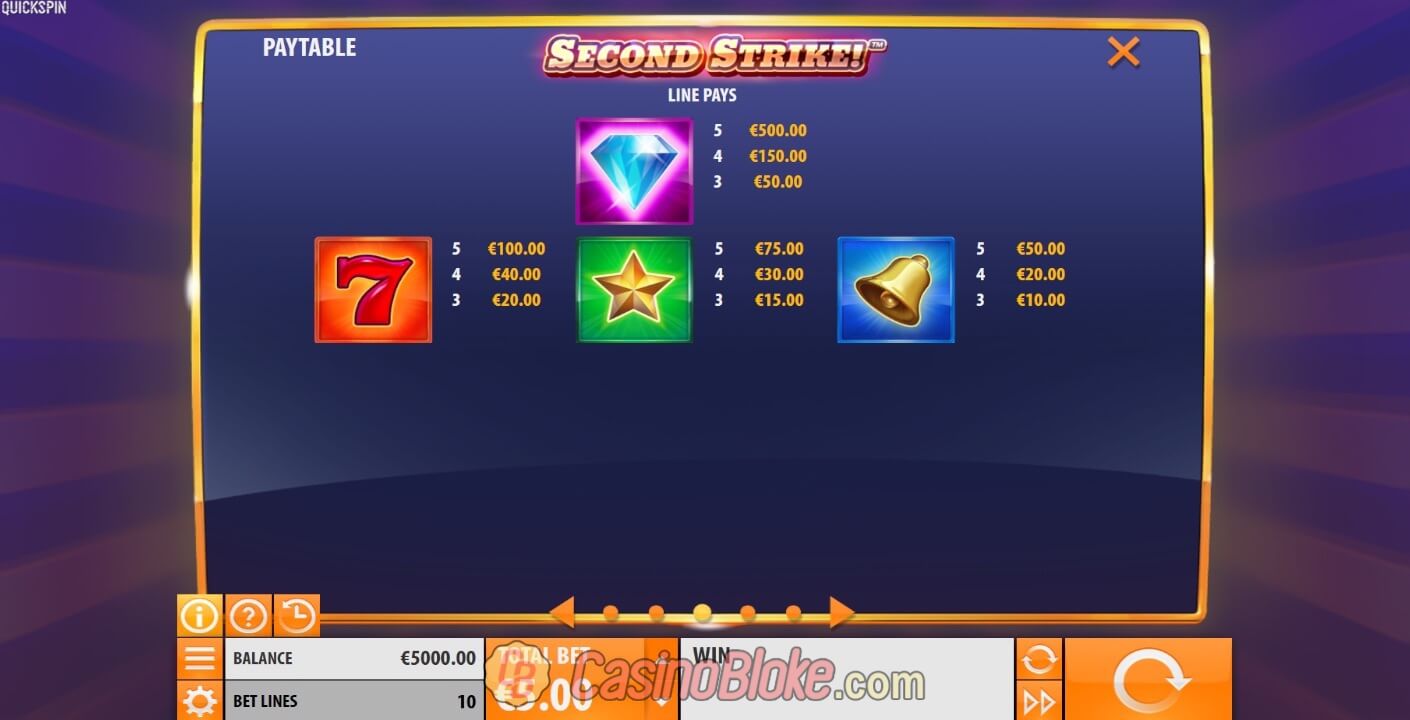 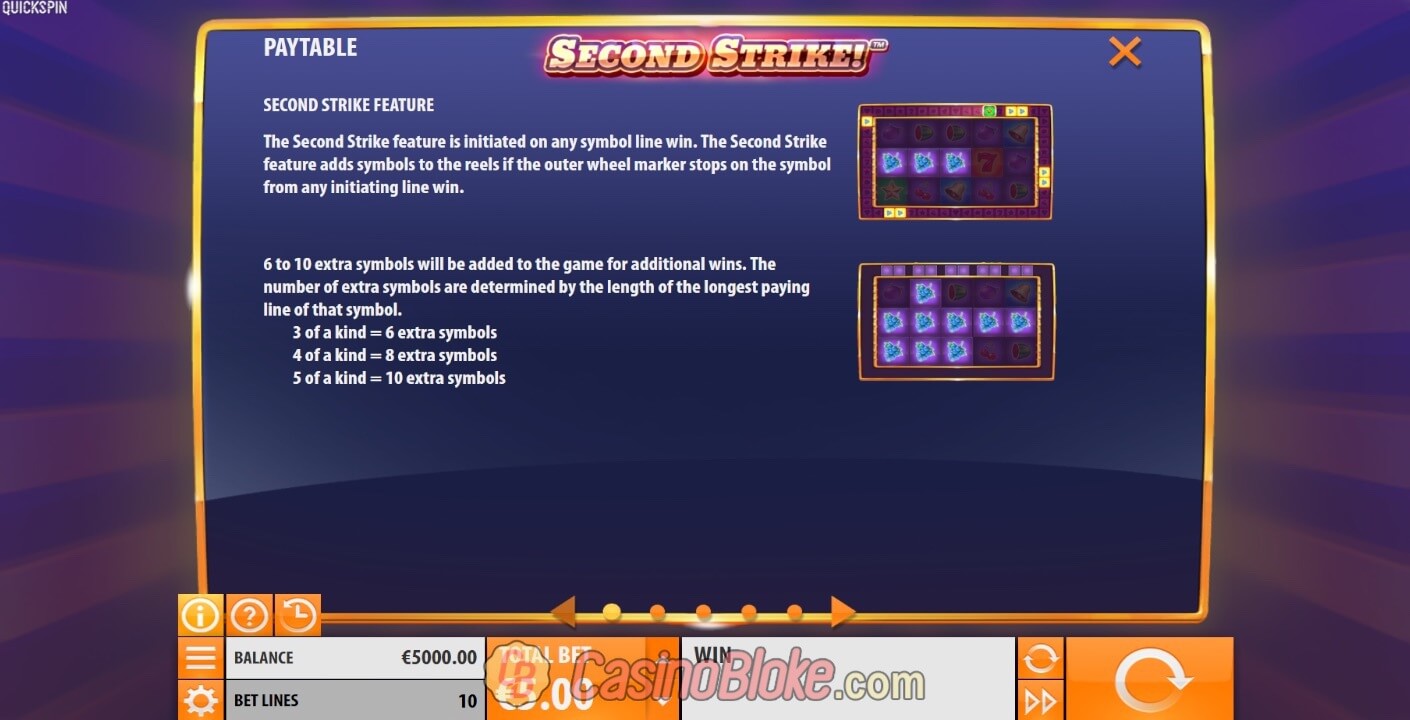 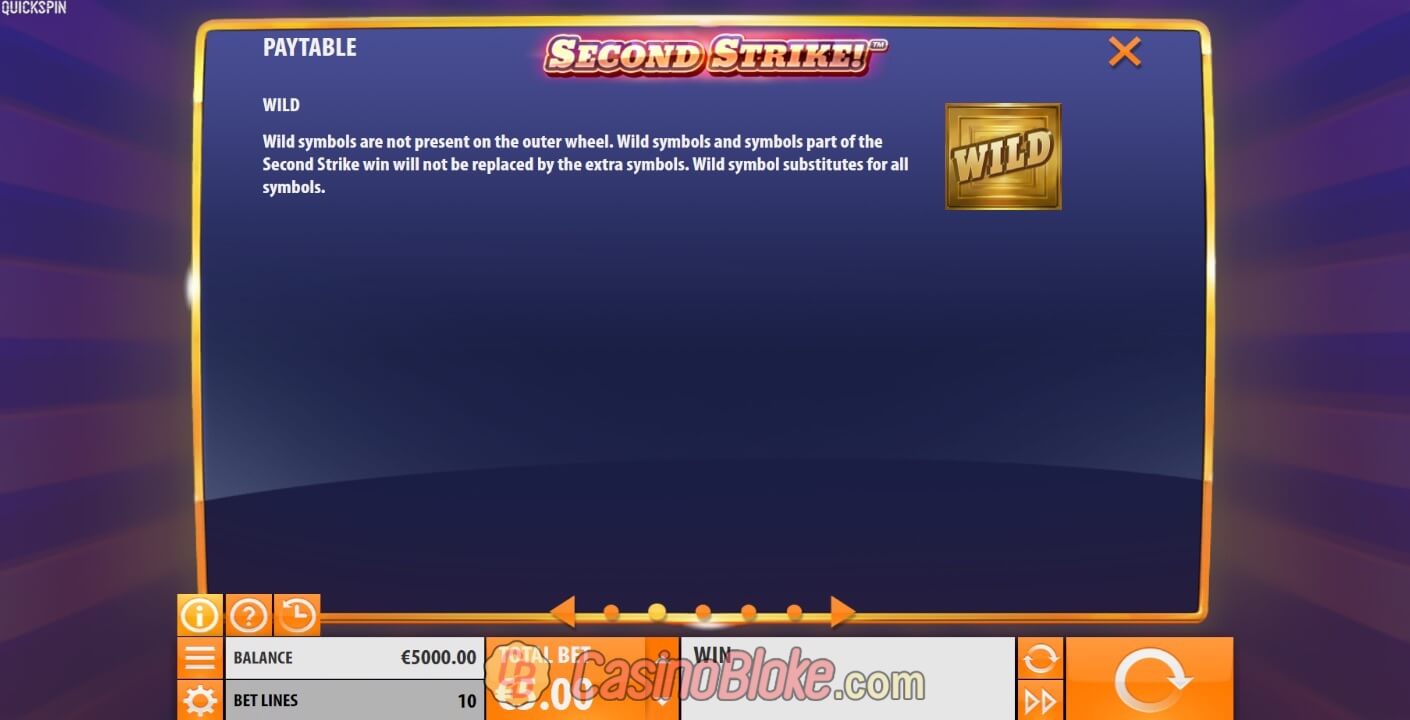 HOW TO PLAY SECOND STRIKE

When you look at it, the 2015 release will definitely remind you of an old-school fruit machine. The visuals are bright and colourful and the reels are packed with familiar symbols. The Diamond is leading the pack and offering the most, followed by Lucky Seven, a Star and a Bell. If you get hungry, there are tasty Watermelons, Grapes, Plums and Cherries among low-value symbols.

There are no Scatters included, so do not expect free spins either. On the other hand, there is the Wild that can be used to substitute for all other symbols, which will help you land winning combinations more easily.

Since this is a classic slot machine in its essence, the rules of the game are as simple as possible. There are no complicated additional features you need to worry about because it all comes down to simply hitting the Spin button. The 2015 release features five reels, three rows and benefits from 10 fixed paylines, which pay left to right, starting from the leftmost reel.

Land at least three matching symbols on a payline if you want to start winning payouts. Punters can bet as low as $0.10 and as high as $100 per single spin.

We do not have much to say in this section of the text, expect to talk some more about the Second Strike feature. Every time you land a winning combination, you will trigger the feature. The outer rectangle surrounding the reels will become active and a light will go around, moving through the fields placed in the rectangle.

All those fields are covered with symbols that appear on the reels. If the light stops on a symbol that matches the symbols from the winning combination, you will get extra symbols to boost your winning combo. Land three, four or five of a kind to get 6, 8 or 10 additional symbols for bigger wins.

Look for the Diamonds on the reels, because they pay the most, offering 100 times the bet for five of a kind. If you manage to fill all the cells with Diamonds, you will pocket 1,000 times the bet, which is the maximum possible payout. Other symbols are not that generous and offer far less coins. Second Strike’s RTP is 96.26%.

You all know that we are action junkies and that we like when a video slot is packed with additional features, which is definitely not the case with Second Strike. Only one special feature and no free spins on the offer. On the other hand, the 2015 release will certainly please most fans of old-school fruit machines, because it is a bit upgraded and can provide you with massive wins if you are patient enough.

Hit the Spin button and wait for the winning combination and after that hope that the light will stop on the winning symbols, to boost your wins to the max. 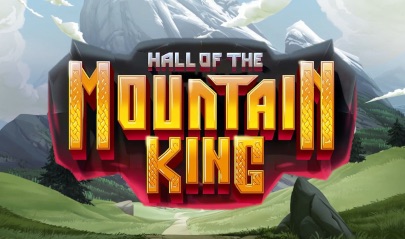 hall of the mountain king