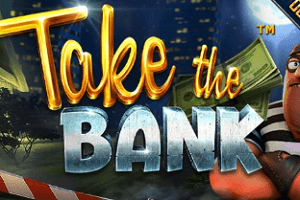 If you have ever thought about breaking the bank, now is the best time, because experienced burglars from all over the world are gathering down at BetSoft, due to the fact that Take the Bank is released. A five-reel, four-row video slot that offers 75 fixed paylines and benefits from some interesting and rewarding additional features. The Master Bomb Counter will secure Wilds on the reels for every tenth spin, while three Police Cars are in charge of triggering the Free Spins feature, where you get 15 freebies and up to 10 Wilds, which wander around and change positions for each free spin.

The Master Bomb Counter is always present during the base game and will occupy several cells on the reels. Every time a Burglar appears, he will turn into a Bomb Counter and, once the Bomb explodes, it turns into a Wild that substitutes for every regular icon. The Police Car is the Scatter that triggers the Free Spins feature. Plenty of valuables can be found in a bank, so look out for Diamonds, Gold Bars, and Money. To break the Vault, you will need a very powerful Bomb, as well as a Crowbar. Playing cards are used for low-value icons.

Every bank has different alarm systems, but in every bank heist the most important thing you need to remember is to follow the rules of the game, and you will be just fine. The 2019 release features five reels, four rows and offers 75 fixed paylines, which pay left to right, starting from the leftmost reel, with three of a kind being the minimum for landing payouts. Only the Diamond will pay even for two of a kind. Set the coin value before you start spinning the reels and bet as low as £0.20 and as high as £20 per spin.

The Master Bomb Counter will be functioning during the base game, turning all Burglar symbols into Bombs and then into Wilds after every 10 spins. IF you are lucky enough, you will get plenty of Wilds to land hefty payouts.

Once the Free Spins feature is triggered, and that will happen when three Police Car Scatters appear on reels 2, 3, and 4, gamers will be rewarded with 15 freebies, which will come with 5, 7, or 10 Wilds that will be placed on different positions during each freebie. The Bomb Counter will not function during the feature. If you do not want to wait for the Police to appear, you can always buy the feature. Also, after every winning spin in the base game, players can play the Gamble feature to double their wins.

The maximum possible payout is not that big, 225 times the bet per single spin. Frankly, we expected more, due to the fact that the theme of the game is breaking the bank. The Diamond is the symbol that pays the most, offering 3 times the bet for five of a kind. You will get the same amount for 5 Wilds on a payline. Take the Bank’s RTP is 96.08%.

Take the Bank on Mobile

Before you go to rob the bank, make sure you have a great exit strategy, simply not to get caught. If your escape driver is not that good, enjoy the 2019 release from the comforts of your homes, or from a safe distance on the go. The BetSoft title is playable across all devices.

+ Guaranteed Wilds on each 10th spin

+ Free spins with up to 10 Wilds on each freebie

– Bombs and Wilds are usually in the back reels

– Not a big maximum payout

The biggest disappointment regarding the 2019 release is the maximum possible payout, set at 225 times the bet. We are not sure whether punters are ready to risk jail time for such a max win. On the other hand, we have to say that we really like the Master Bomb Counter and the way it turns Burglars into Wilds. However, they are not usually in good places when they are turned into Wilds. That was also the problem with Wilds in the Free Spins feature. Even so, we still managed to land some decent wins.