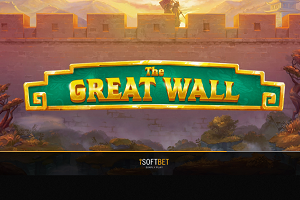 According to the legend, the Great Wall of China was built centuries ago by the Ming dynasty, in order to protect the realm from invaders and to secure the silk road. The Great Wall, a five-reel, 20-payline video slot will take you to the magnificent wall, where you will be spinning the reels as you walk down the wall, landing win multipliers, double wins and triggering the Free Spins feature. Up to 1,000 times the bet can be won in the base game, while the biggest possible win in the iSoftBet title is set at mouthwatering 8,297 times the triggering bet.

As we have already mentioned, the reels are set on the very wall, and you will be seeing plenty of warriors walk around as you play the game. You will also meet the Emperor, which is used as the Scatter, as well as the Empress, which is the highest-paying symbol in the 2019 release. The Jade is the Wild that substitutes for all regular icons. Ming Warriors will also appear on the reels, and players will come across Golden Chests and Golden Ingots as well. Standard playing cards are used for low-paying symbols.

As for the rules of the game, they are quite simple, because the stress is on guarding the wall and guarding your treasures, rather than on gameplay. The iSoftBet product features a standard 5×3 reel grid and benefits from 20 fixed paylines, which pay left to right, starting from the leftmost reel. Land at least three matching symbols on a line in order to start winning payouts. Every spin will cost you 20 coins, while the coin value can be altered. the betting range is not that wide and gamers can wager from £0.20 to £30 per single spin.

As the reels move across the Great Wall while you play the game, you will notice that different prizes will appear above every reel, like win multipliers, which go up to 1,000x, double prizes and the Free Spins feature. Your task will be to land the Emperor on the reels ant the prize from that particular reel will be awarded to you.

If our sources are correct, punters can pocket up to 8,297 times the bet in a single spin, which is quite good, especially if you set the bet to the max. Win multipliers up to 1,000x can be won in the base game, while in the Free Spins feature they are doubled. The Empress is the symbol that pays the most, offering 500 coins for five of a kind. The Great Wall’s RTP is 96.23%.

The Great Wall on Mobile

Not everybody can afford to visit the Great Wall of China and not everyone will be able to cross the entire wall, so why bother, when you can experience the Great Wall from the cosiness of your homes or on the go. The iSoftBet title is playable across all devices and offers the same gaming experience on any compatible gadget.

The Great Wall is another video slot themed after traditional China, and we feel that there are more than enough good games with a similar topic. The 2019 release boasts crisp graphics and a fitting soundtrack. What we liked the most is the Great Wall feature, where spinners can win generous multipliers, especially during the Free Spins feature. Being action junkies ourselves, we like when a video slot offers loads of additional features, which is not the case with the iSoftBet title.

New players only – Maximum bonus is £123 – Max bet with bonus is £5 – No max cash out – Wagering is 50x – Skrill & Neteller excluded – Eligibility is restricted for suspected abuse – Cashback is cash, so no wagering – Cashback applies to deposit where no bonus is included. Full T&C apply
97.0%
Read Review
Play Now
5.

Art of Choosing a Slot Machine: What to Pay Attention to

Picking a slot is a difficult task. Yes, they all technically have reels, and all you’re doing is spinning said…

Roulette players have been trying to beat the wheel since it was invented. Different players use different strategies, methods and…

Best Bets You Can Place in Online Casinos

On our gaming portal, we have already presented the worst bets you can play in online casinos. This time, we…

To help you make the best decision when choosing online slots to play, we bring you yet another list of…